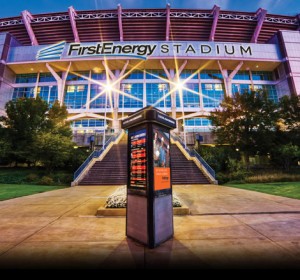 I called First Energy Stadium, a month ago to inquire if hummus would indeed be served up at the Browns games after the National Football League announced that Sabra Dipping Co., would be the NFL’s official dips sponsor… the answer is nada.

How are Clevelanders supposed to “Dip Life to the Fullest” if they can’t dip their Fusion Rolls, Pinzone’s Market Fresh Meat Sausages, Fried Mac & Cheese Balls, Grilled Cheese Pretzels, Sweet & Spicy Baby Back Ribs, and then wash it all down with Cleveland Whiskey, if hummus isn’t even available.

The 6 foods just mentioned are newest bites that were ready to be chowed down at Sunday’s home opener for the Browns and there is not one chickpea in site.

What I’d love to see is Mitchell Schwartz’s face covered in a shmear of tahini and chickpeas, I think then hummus may have a chance at First Energy Stadium.