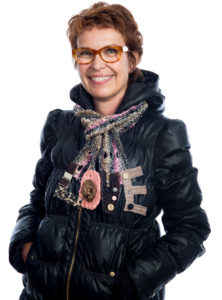 Jill Wieder never imagined her close-knit relationship with her mother would weave itself into a unique fashion art project and an emotional journey through the grieving process.

Moreland Hills resident Wieder had been knitting for eight years, focusing on hats, scarves, headbands and hand-warmers. Upon seeing that Wieder’s busily clicking needles had turned into a passion, her mother Betty Weiskopf also began to knit. It soon became an activity that mother and daughter enjoyed together.

But in May 2011, everything changed when Weiskopf lost her battle with breast cancer. Wieder admits she was struggling after losing her mother and found herself unable to knit. “I thought that I shouldn’t be doing something that brought me that much joy when I’d lost her,” Wieder says.

But soon Wieder, who sells her designs under the moniker Purly Girl, needed to get back to her knitting. Wieder thought about how she’d always wanted to incorporate words in her work, so she went through the alphabet and came up with 26 words that she felt connected to her mom in some way.

Wieder’s Wordies line features a variety of scarves featuring fabric letters spelling out many of those key words inspired by Weiskopf. Letters are cut out of different types of materials, including from some items that belonged to Weiskopf. All the scarves are embellished with a button or bit of jewelry from Weiskopf because Wieder says she felt if something of her mother’s was on each of the scarves, it would feel like part of her was still here.

Wieder plans on selling the Wordies this fall, and a portion of the proceeds will be donated to a fund set up in Weiskopf’s memory at Montefiore. Besides the 26 Wordies she made in honor of her mother, she made two Wordies – bearing the words “Meow” and “Woof” – for the Geauga Humane Society to raffle off for charity. She also donated one that said “Able” to Jewish Family Service Association’s Horvitz YouthAbility program.

“My mother was always a giving individual,” Wieder says. “It made me feel good to give those Wordies, and it was sort of an extension of the project. The whole Wordies project was cathartic.” 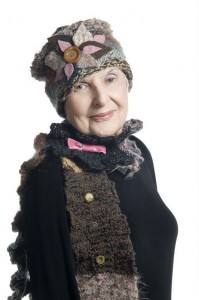 Jill Wieder’s mother Betty Weiskopf, who died in 2011, was the inspiration for Wieder’s new line of scarves. Weiskopf is pictured in knitted accessories designed by her daughter.

Wieder plans to make a book about the project that will incorporate the photos taken and the quotes the models gave her about the experience and why they chose the words they did.

“It’s come full circle,” Wieder observes. “It’s very emotional. I think my mom would be really proud. We had the true mother-daughter relationship – the ups, the downs, the good and the bad. The whole project was for her and for our relationship and about what we really meant to each other.”

Knitting for Wieder is more than a craft hobby, she says, noting she views it as creating and designing. “I think fashion is a form of expression of one’s own personal style and emotion,” she says. “I think fashion tells a lot about a person and the way they present themselves. I think it’s an extension of their personality. Fashion expresses who we are as individuals.”