Honey is but one of the goods that comes from the backyard of Doug Trattner, who when not writing about food is cultivating it – and in the process raising urban farming’s profile in Northeast Ohio 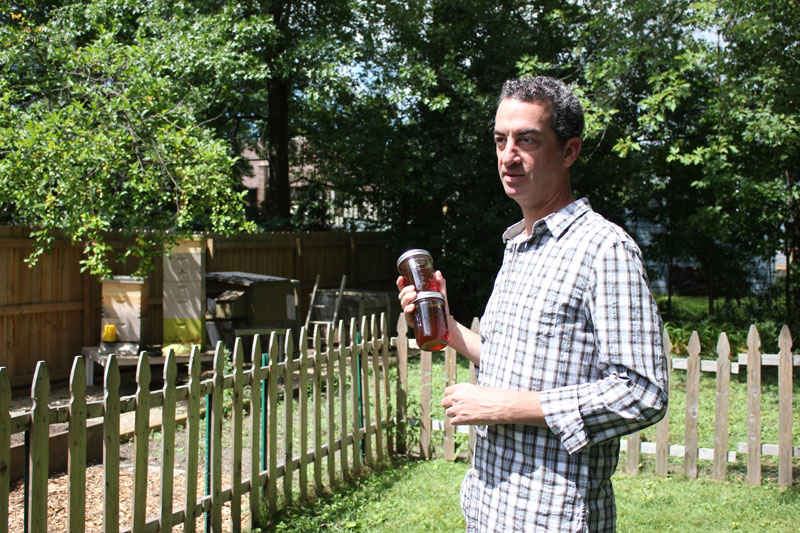 Doug Trattner points out the bee colonies in his backyard while holding two jars of honey his bees produced.

Weeks before Rosh Hashanah, Doug Trattner stands outside his house recalling Jewish New Years of his childhood. Apples and honey were of course tradition – as was where those items came from. Were they store-bought?

While store-bought goods are commonplace, such is no longer the case for Trattner and his wife, Kim. Tens of thousands of honeybees buzz around the Trattners’ Cleveland Heights property, and for the second consecutive year, their High Holy Day honey will come right from the backyard.

“We have a huge extended family and we all get together for Passover and Rosh Hashanah,” Doug Trattner says. “We brought our own honey to the seder last year, which was really nice.”

Add to those bees a handful of chickens, blueberry bushes, tomato plants, fresh herbs and even a plum tree – which had long been on his property but went undiscovered until his bees were there to pollinate it – and Trattner has what amounts to a small urban farm.

The Orange native and Ohio State grad, an award-winning food scribe for Cleveland Scene, often shares his urban farming adventures – and bounties – on social media, in the process making him a high-profile advocate for the practice in Northeast Ohio. His agrarian, avian and apiarian ways are more passion than hobby – and it shows.

“The more people who can see what’s going on, the better. That’s why I post pictures all the time,” he says. “I think the biggest part is letting people see that it’s not dirty or loud or smelly or all the things people are terrified of.” 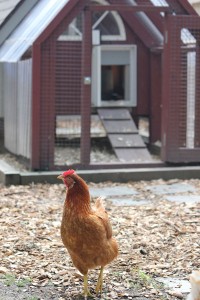 Both chickens (above) and bees (below) have free range in the backyard of Trattner’s Cleveland Heights property.

As for what came first, for Trattner, it was the chickens – then the eggs. More specifically, an average of three eggs each day.

“As soon as we were allowed to have chickens, I got chickens,” he says.

Allowing Cleveland Heights residents to own hens was just one change the city experienced in 2012. Richard Wong, planning and development director of Cleveland Heights, says the entire zoning code was revised to be more sustainable.

“The staff of the city felt it was time (in 2012) to look at the entire zoning code to see how we could encourage sustainability initiatives and remove anything that was an impediment to sustainability,” Wong says. “We wanted to make it easier for people to have gardens, keep chickens and so on.”

Once the city approved Trattner’s application and chicken coop plans, which was a “fairly quick” process, he purchased his first group of chickens from a farm about 10 miles northeast of Ashland. After driving down to pick up the days-old chicks, Trattner raised them in his house for about four months before moving them outside.

Trattner encountered early challenges when a couple of his chickens died unexpectedly of natural causes. Undeterred, he subsequently purchased 3-month-old chickens from a different Ohio farm. He specifically bought breeds of chickens that are hearty for the Midwest: Barred Plymouth Rock, Australorp and Golden Buffs.

Since then, things have been good. Trattner has expanded the fenced-off area in his backyard – now measuring about 50 feet by 20 feet – to give his chickens more room to move around. He’s also added a second, more modern coop, complete with an automatic door that opens at dawn and closes at sunset.

The Trattners’ was one of the first households in Cleveland Heights to own chickens. Today, 43 coops have been approved throughout the city, Wong says. A Facebook page that Trattner started, “Cleveland Heights Chicken Keepers,” now has more than 300 members.

“Having chickens just makes sense. They eat your table scraps, they give you eggs and fertilizer for your gardens, and it’s not a lot of work,” he says. “I really can’t think of reasons not to do it.”

But not everyone was on board with allowing chickens to reside in the neighborhood. Some people were making “dire predictions,” Trattner says, like plummeting property values and vermin and pests. A year after the ordinance was changed, Trattner contacted city officials to see if any of this had occurred.

“They said not only is it not horrible and we haven’t had complaints, people are reporting there are benefits in unexpected ways, like meeting neighbors,” he says. “People down our street will bring their kids and grandkids over – they all know we have chickens – and they come and check them out. I think it kind of establishes community in ways people didn’t expect.” 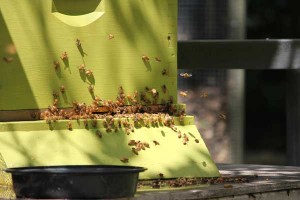 Hatched from his enjoyment of keeping chickens was the idea of beekeeping.

“I started reading up on it, and I told my wife I was thinking about doing it. She thought it was crazy. I kind of thought it was crazy, too,” he jokingly says. “Like everything, I’ll just get a book and read it, and the more I read and talk to people, the less scary it seems.”

Trattner ordered bees from an Ohio apiary in 2014, after he gained approval from the Ohio Department of Agriculture. The honeybees are housed next to the chickens in a hive that begins as one small wooden box.

“It didn’t seem that big of a deal until I got them,” he says. “When you install the package you have 5 pounds of bees and you literally just pour them into the box to get started. I had my (protective) suit on and everything, but it was still terrifying.”

As the queen bee continues to lay eggs and the colony grows, more boxes are stacked on top. The top several boxes are reserved solely for honey, which is harvested in the fall.

Trattner now has two colonies of bees. He’s already collected about 10 pints of honey this year and expects to get at least another 30 pints by the end of the season.

As with his chickens, however, Trattner experienced early challenges with his bees.

Due to Cleveland’s excruciatingly cold and long winter in 2014-15, all of the bees in Trattner’s original colony died. He notes that what happened to his colony wasn’t a result of the colony-collapse disorder that’s making headlines these days and adds that since he takes a nonchemical approach to urban farming, it’s difficult to find good information on how to alleviate some challenges.

“I don’t use any chemicals on anything – not in the garden, not for the chickens or the bees, and there are no sprays on the yard,” he says. “Everybody’s answer to everything is always add this chemical or that chemical, and I just won’t do that.

“Like everything there are two paths, and I’m going down the path that has less information. It’s more homespun – we’re doing things the green way and the non-chemical way – but it’s more challenging to do it that way.”

While Trattner continues to read books and old-time manuals on backyard farming, he admits that much of his knowledge has come from trial and error. He’s also taken advantage of the county beekeeper who has visited his property to inspect his hives and offer advice.

Next on Trattner’s agenda? Planting fruit trees in his front yard. But as far as animals go, for the moment Trattner is content with his chickens and bees.

“There’s nothing better than walking out here and getting fresh eggs,” he says. “My wife and I both work out of the house, so to be able to come back here and see the chickens, it’s a nice escape. It’s hard to have a bad day when you have chickens around.” js

The Ohio Department of Agriculture has overseen beekeeping in the state since 1904. In 2014, the state reported that 4,435 beekeepers registered in accordance with Ohio Revised Code section 909.02, which represents 6,028 apiaries and an estimated 39,055 colonies.

As for chickens, here’s a look at what some Cuyahoga County communities allow – or disallow – regarding fowl:

Beachwood: A permit is not required for the keeping of fowl. Roosters are not permitted. Fowl must be restrained at all times in a structure designed to house fowl.

Chagrin Falls: Chickens are permitted solely in the R1-100 district. A maximum of four chickens may be kept on a property. Roosters are not permitted. Coops are allowed in the backyard only and must be located at least 15 feet away from the main building and all adjacent lot lines.

Cleveland: One chicken is allowed per 800 square feet of land. Roosters are not permitted on lots smaller than one acre. Coops must be kept in the backyard and must not be located within 5 feet of a side yard line or 18 inches of a rear yard line. One beehive is permitted for every 2,400 square feet of land. Keeping chickens or bees requires licensing by the Cleveland Department of Public Health.

Cleveland Heights: A maximum of four chickens may be kept on a property. Roosters are not permitted. Coops are allowed in the backyard only and must be located at least 10 feet away from any building or an adjacent lot.

Lyndhurst: Maintaining or harboring livestock or fowl is prohibited.

Pepper Pike: Owning fowl, including chickens, is allowed. Chickens are not permitted to run at large upon any public space or any unenclosed lands or the premises of another.

Shaker Heights: Fowl are allowed but must not be a nuisance or injurious to neighbors. No more than three colonies of bees or beehives may be maintained on any one parcel of land. Beehives must be at least 50 feet from any building.

South Euclid: A maximum of four chickens may be kept on a property. Roosters are not permitted. Chicken coops and runs are allowed in the backyard only.

University Heights: Owning fowl, including chickens, is allowed. Fowl must not be within 500 feet of the inhabited dwelling of another person. js