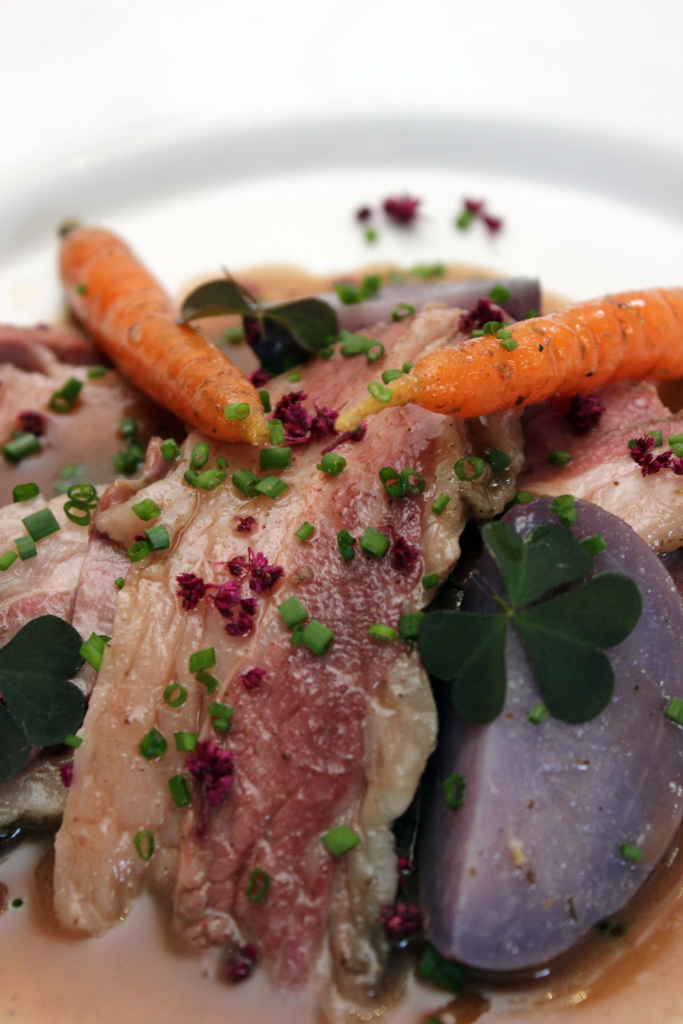 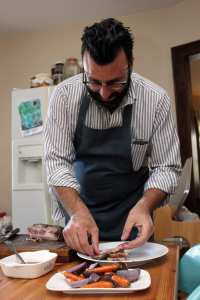 Umansky makes beef navel the foundation of his dish.

In some ways, chefs aren’t too different from painters. The kitchen is their studio, a plate their canvas, and in the end, both are attempting to create works of art – one from a palette of colors, the other to please one’s palate.

Jeremy Umansky, co-owner, forager and larder master at Larder: A Curated Delicatessen & Bakery, which will open this fall at 1455 W. 29th St. in Cleveland, is adept at blending the artistic with the culinary. Presentation of food is key, he says, because as eaters, we develop a strong idea of whether food is going to be good well before it hits our lips.

“The biggest thing is we eat with our eyes, straight up,” says the Cleveland Heights resident. “Before we smell it, before we read about it, we see it – and we can already make a decision on whether we’re going to like it or not.”

For home entertainers seeking to impress their guests, that’s insight worth keeping in mind. While most people don’t own restaurants and even fewer can be considered world-class chefs, everyone can learn the art of food presentation by adhering to these helpful hints provided by Umansky.

Umansky says a good way to start dressing up dishes is to arrange food in a way that resembles natural things.

“There’s a certain naturalistic aesthetic appeal to different aspects of plating,” he says. “For example, a plate that mimics something in the natural world – whether it’s a tree or a flower or a flowing river – is much more aesthetically appealing than it would be to mimic something unnatural, such as a building or a roadway or something like that.”

Most things in nature aren’t uniform, such as flowers, which normally have an odd number of petals, and trees, whose branches are often asymmetrical. For various reasons, Umansky says, odd numbers are considered more aesthetically pleasing than even numbers when it comes to what’s on a plate. 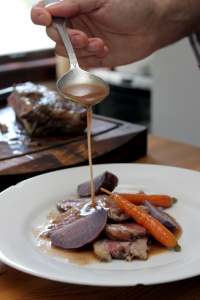 Umansky drizzles a simple red wine pan sauce over the dish. Thin sauces such as this one can be poured over the “star” of the dish, he advises, but thicker sauces, such as cream sauces, should be placed underneath to let food settle into it. 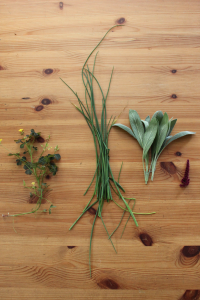 From left, foraged wood sorrel, chives, sage and quinoa flowers, all of which Umansky used to garnish his dish. 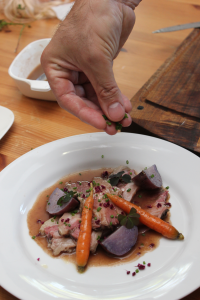 Colorful garnishes on top of the main course can make the dish pop, Umansky says, advising that if the garnishes are underneath, no one will see them.

Color is another aspect to consider. When it comes to food presentation, Umansky says one wants the selection to fall into one of two categories.

“You either want to be extremely contrasting or somewhat homogenized,” he says. “Anything in between is going to kind of throw people off. It’s going to distract the eyes from what’s really important on the plate: a main ingredient or a main flavor.

“A lot of this has to do with, classically, how we interpret colorful aesthetic and pleasing aesthetic,” he continues. “A lot of these plating techniques were born out of classical art movements, even going as far back as something like the Renaissance. The use of color, the use of shading, contrast to create vividness – those movements in the display of food came out of those movements in art.”

Umansky says Larder will be an “eastern European delicatessen,” which also invokes a certain sense of color.

“We’re looking at charcuterie boards, like cured meat and fish boards that display a main ingredient with some pickles,” he says. “A lot of cured meat has beautiful, brilliant red hues to it, so it’s nice to pair it with like a green pickle, or maybe something that’s pink. So, we rely on those vivid hues against either a metal or wood plate. Those hues really stand out against that sort of thing.”

In addition, sandwiches will be wrapped in butcher’s paper and tied with butcher’s twine – details that can add to presentation.

“Those are some of the things, just based on that, having the right color butcher paper, which is this ‘peachish-brown’ color, and having the proper piece of twine on there, when people see that package tied up, they say ‘Oh, this is an authentic deli sandwich,’” Umansky says. “As opposed to something that may be wrapped in plastic wrap with a sticker label on it. Those are some of the things that we look for in the deli setting.” 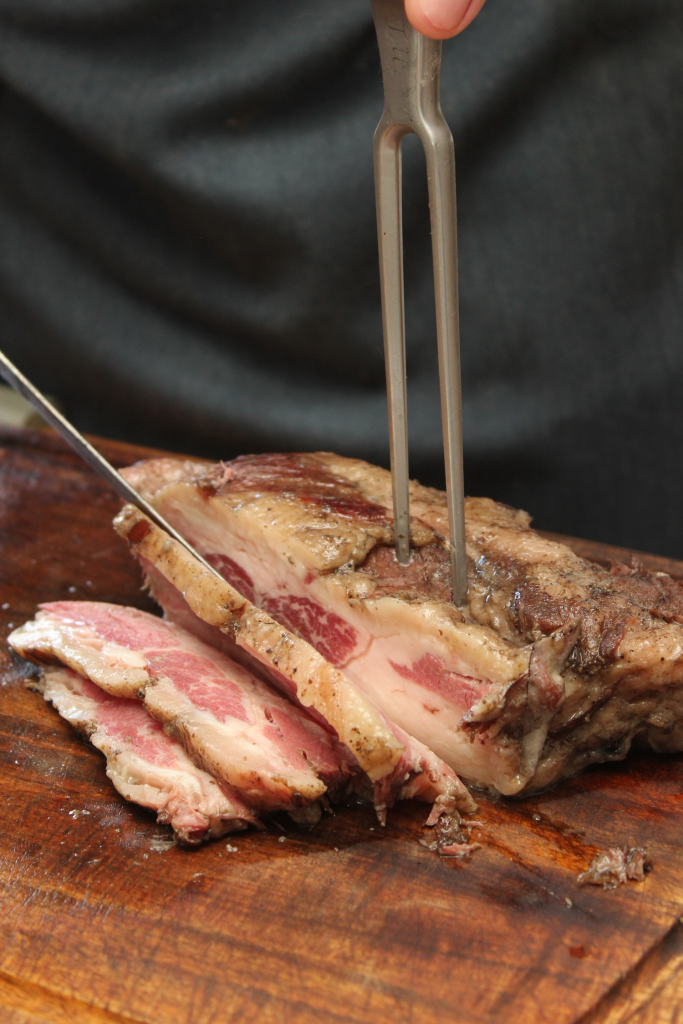 The beef navel Umansky slices is representative of what will be used at his restaurant, Larder: A Curated Delicatessen & Bakery, when it opens later this year in Cleveland’s Ohio City neighborhood.

“For example, if you’re making a plate of something and you think a lemon wedge would look nice on the plate, but there’s no lemon in the dish and the squeezing of the juice from that slice of lemon is not going to help the plate out, that’s a non-functional garnish,” he says. “It’s just there to add a proper color. We go to buffets and salad bars a lot and we see big bushes of kale or someone carved a carrot into a flower. Some of that’s artistic, but it’s been misconstrued from its origins. If the garnish (meant) to bring the dish to life doesn’t make sense for the dish, then don’t use it.”

Another bit of advice? Herbs are your best friends and you should keep them handy for cooking.

“Any fresh herbs, a lot of times the French refer to them as ‘fin herbs’ or in English, we’d say ‘fine herbs,’ they are flavorful herbs that are very green, they’re light, refreshing,” Umansky says. “So, things like parsley and tarragon are ‘fin herbs.’ Chives are ‘fin herbs.’ And these add impactful flavor that work to harmonize other flavors on a dish. It will tie in heavier flavors and help balance out acidic flavors and that sort of thing. It’s easy just to chop them up and sprinkle them on a plate.”

Also, use more than just the leaves of herbs.

“Cut the stems up, too,” he says. “There’s a lot of flavor in there. Chop them up just as fine as you would the leaves. There’s no reason to waste the stems.” 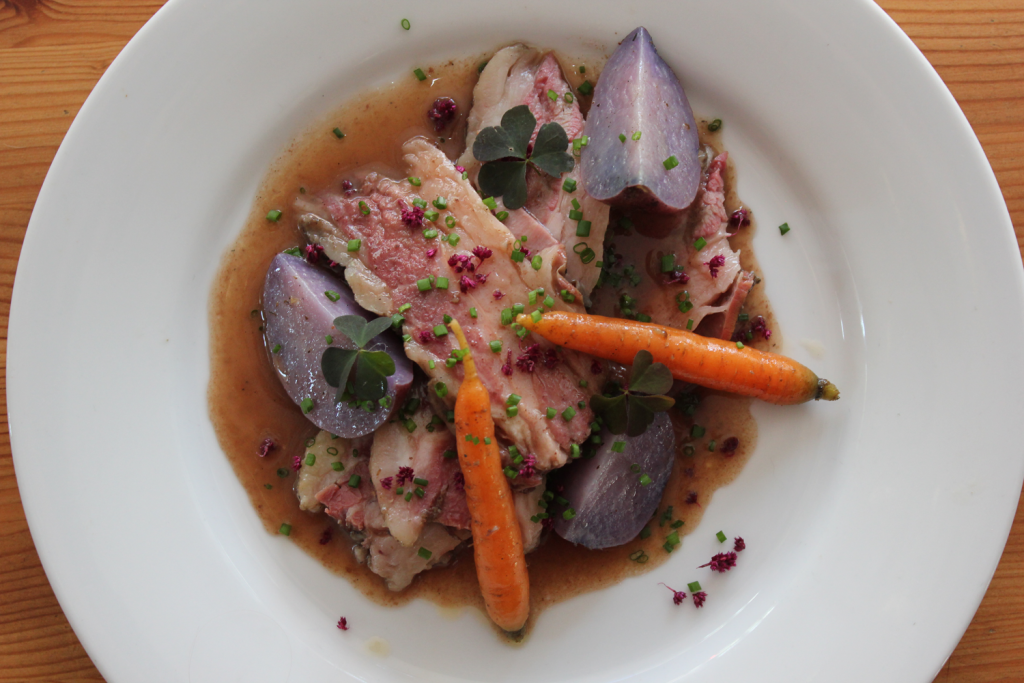 Umansky suggests using odd numbers when plating dishes, as he did with three slices of meat and a total of five colorful carrots and potatoes.

Umansky, a member of The Temple-Tifereth Israel in Beachwood, might not make home dishes into visual masterpieces on a nightly basis, but he does still consider presentation away from restaurants and the pop-up dinners he’s hosted.

“It depends on what kind of day I’ve been having,” he says, laughing, when asked whether he spends time on presentation at home.

“Something that’s important in working with food is you have to have good habits all the time,” Umansky says. “As a chef, that means having all your ingredients properly planned out and the timing of how you cook different things (worked out) so that nothing’s undercooked or overcooked – because all these ingredients have different cooking times. As someone who’s a professional chef, whether it’s at work or at home, we put out those same principles, we maintain that consistency all the time, because it keeps you sharp, it keeps you focused.”

To that end, Umansky says he’s fortunate in that his hobby and life’s passion – cooking – is also what pays him.

“It’s an all-the-time reinforcement,” he says of his cooking habits at home, adding that his mother was in town recently, and after cooking for her, he plated the food as if he were at a restaurant.

One final piece of advice Umansky offers regarding food presentation: Have fun and be creative.