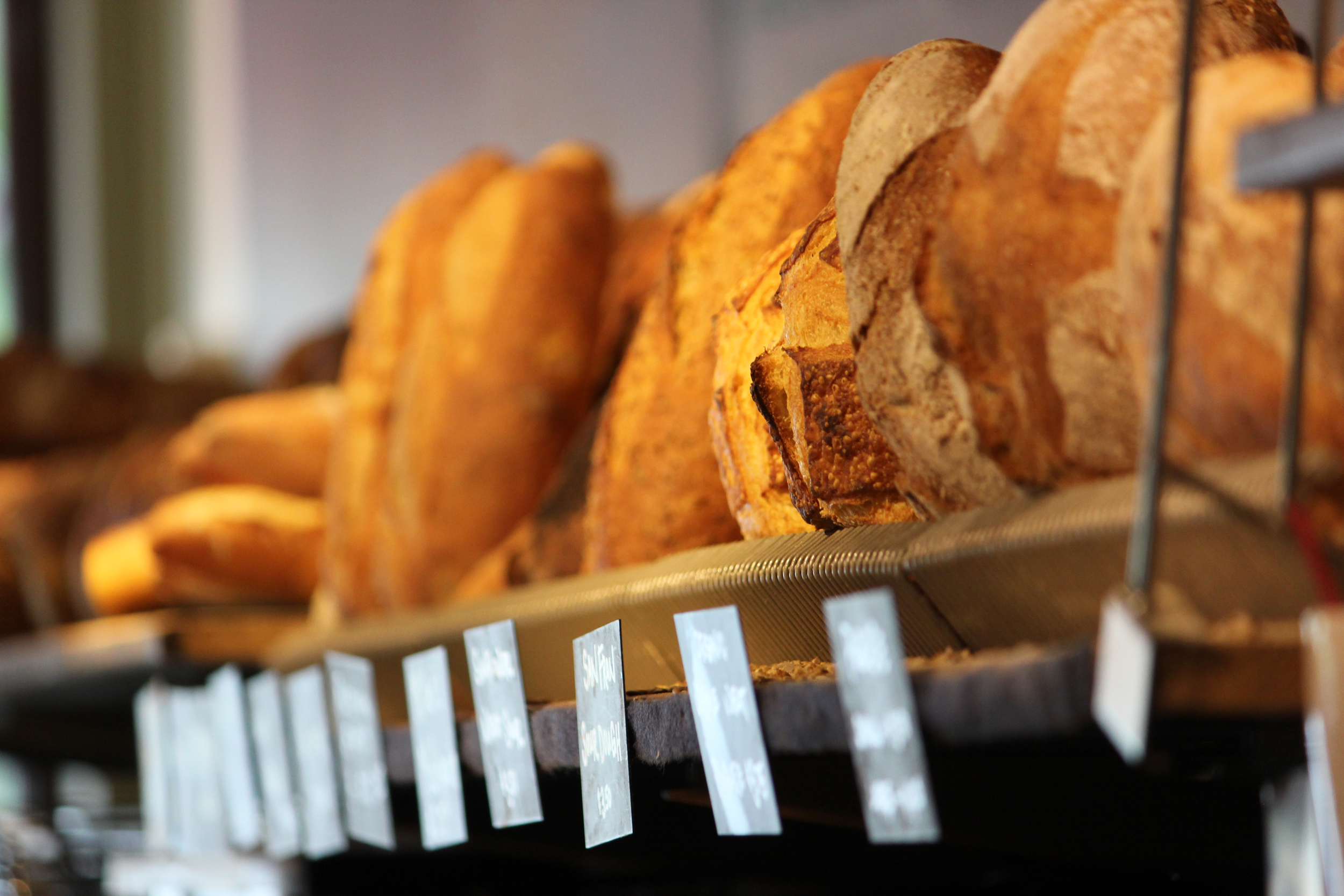 Among the breads that line the top shelf behind the counter at The Stone Oven are Italian Pugliese, organic whole wheat Pugliese, San Francisco sourdough, sunflower wheat, Miller’s multigrain and Russian black bread.

Those who walk into The Stone Oven in Cleveland Heights will notice a community of customers talking, laughing and eating together. In the background is a colorful chalkboard menu and a wall filled with a variety of golden-brown breads. Next to the registers is a display of different pastries, biscuits, cookies and muffins, inviting customers closer, and below that is a refrigerated case containing more temperature-sensitive delights like lemon squares, brownies and cakes.

Stepping into The Stone Oven, one feels a sense of belonging – and calmness, even during hectic mealtimes. Employees maneuver around chairs, customers and each other to deliver sandwiches and salads to tables or pastries to the front counter. The restaurant has life. That goes for downstairs, too, where bakers busily hand craft croissants, tea biscuits, muffins and other baked goods. 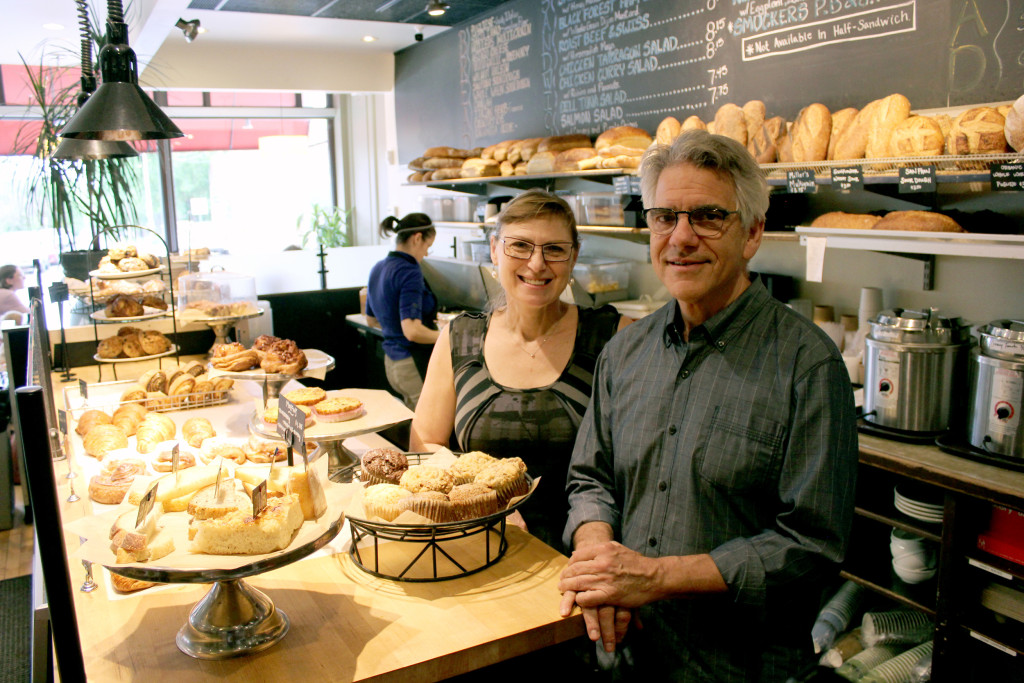 Tatyana Rehn and John Emerman, co-owners of The Stone Oven, stand behind the pastry counter at the Cleveland Heights location.

The shop’s owners, John Emerman and Tatyana Rehn, aren’t always in the building at 2261 Lee Road at the same time. It’s normal for Emerman to be there but out-of-the-ordinary for Rehn, whose primary responsibility is The Stone Oven’s wholesale bread venture, which operates out of a separate facility. Still, both are recognized by customers.

The Stone Oven feels like a family-run business. In many ways, it is. Emerman and Rehn were married when The Stone Oven was founded, and though they’re now separated, they maintain a cordial – and professionally effective – relationship. One of their two daughters, Sasha, still works at the store from time to time.

That familial feel – and the communal atmosphere it fosters – has helped the business become a community staple for 23 years now. Not bad considering both of their professional backgrounds were in engineering, not baking.

Emerman appreciates the support they receive from customers.

“It’s really nice when somebody … just stops to let you know ‘thanks for being here,’” he says. “I don’t ever know how to respond. I say ‘thank you,’ but it always catches me off guard.”

Filling out the menu

The Stone Oven began as a wholesale bread operation, selling artisan, European-style breads to various cafés and stores. Eventually, Emerman and Rehn expanded by opening a bakery and café.

The menu is an assortment of comfort food, from sandwiches and salads to homemade soups and hand-made pastries. Its most popular menu item, says Emerman, is likely the smoked turkey sandwich with honey mustard and provolone cheese, which embodies the way the owners describe their food: simple, healthy and most importantly, fresh.

It offers plain or raisin Challah, one of the few apparent connections to Emerman and Rehn’s Jewish heritage, as well as a variety of other breads, such as the traditional Italian Pugliese bread and San Francisco Sourdough, as well as The Stone Oven’s popular multi-grain bread, all made in-house at The Stone Oven’s wholesale baking facility on the outskirts of downtown Cleveland. The facility provides bread for all The Stone Oven locations, of which there are three: one at 28601 Chagrin Blvd. in Woodmere, one in downtown Cleveland at 1301 E. 9th St. (inside the Galleria), and the Lee Road shop, which has been in operation the longest and is the de facto flagship store for franchise.

The Stone Oven’s menu hasn’t changed much over the years.

What the menu lacks in variation it makes up for in simplicity – by design. Emerman says a simple menu keeps the operation running efficiently.

“One of the big things that I care about most – I mean the food’s important and so is obviously, ambiance – is customer service,” he says. “And to have a sort of a pared down, simple menu speeds things up, so we can get people through because we’re quick service (or) fast dining – whatever you want to call it. Getting people through the line is super important, so the smaller the menu … the faster we can do that.” 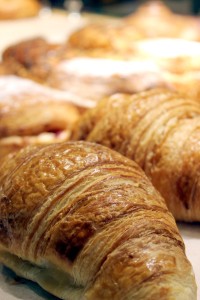 Among the baked goods available at The Stone Oven are croissants, which along with other baked goods, are made on site. 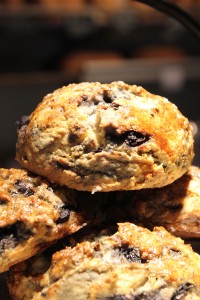 Another of The Stone Oven’s calling cards is the way in which it provides a space for the community to come together to share food, which Emerman, considers a nod to a Jewish upbringing.

“My family, like most Jewish families … eating together, a sense of community sharing food was so important,” he says. “When I got out of college, I didn’t know exactly what I wanted to do and I worked in restaurants and loved that, working in that environment, feeding people, serving people. … That was really exciting for me, and it wasn’t until many years later that I realized this is really what I want to do.”

The Cleveland Heights location has become lodged in the fabric of many families and couples, Rehn says.

“I know at least one couple that used to live around the corner (in Cleveland Heights) that has since sold their house and now they live in Lakewood,” she says. “Every Sunday morning, they are here to meet with this other couple with whom they shared morning breakfast … for years. They come here. Talk about going out of their way. They come back.”

Hearing stories such as that are rewarding for Rehn, because it means The Stone Oven is a meaningful place for people.

“I am sure a lot of people would be very sad and upset if we stopped existing,” she says, suggesting a family has formed among owners, employees and customers.

“People say to us, ‘I basically gave birth to my families here,’” she says. “These kids are now married and have their own children. Not to mention the kids we hired 20 years ago, now they’re successful lawyers, account managers, working in Chicago, New York, whatever, with their own children. They were our little kids working here.”

The Stone Oven could be considered Emerman and Rehn’s third child – one that’s required a lot of care and attention, as small businesses (and children) do. Neither regrets business decisions made over the years but both acknowledge The Stone Oven hasn’t been something they could step away from for extended periods of time.

“The only advice I’d give my (past) self was … the business was permeating everything. We never left the business, it was exhausting,” says Rehn, adding she also would’ve advised herself to not talk about the store constantly, even when she and Emerman were married.

To take his mind off of the business, Emerman says he typically takes trips far from Northeast Ohio. Otherwise, his mind is at the business, pulling him back like a magnet.

“I’m very envious of these other restaurants or cafés that close on a Monday, for example,” he says, noting the wholesale bread portion of the business essentially requires they be open seven days a week.

Eventually, of course, neither the 62-year-old Emerman nor 56-year-old Rehn will be at the shop at all. Retirement beckons, and since both of their daughters have other careers – and lack interest in taking over the family business – it’s currently unclear who will take the reins when the couple hang up their baking aprons.

“To me, it’s really important that this business continues the way it is,” Emerman says. “I almost want to sell it to someone who lives in Cleveland Heights, who really sort of gets it and wants to continue the way it is. Just sort of hoping and praying that someday somebody will come along. Or work for me and sort of rise up and make a nice, smooth transition. We’re waiting for that day to happen, and in the meantime, I’ll just keep showing up to work any way I can.”

Rehn says she isn’t holding out hope someone will come along to take control of the wholesale aspect of the business.

“I need to be in a position where the business is not dependent on me, physically at least,” she says. “I don’t know what’s going to happen, but right now, I need to feed all of my people and all of our stores.”

The two keep a sense of humor about the situation, though.

“If you know anybody, send ‘em our way,” Emerman says with a smile. js