Environmentally conscious Tiny Houses may be the next big thing in housing, and two have sprouted in Cleveland’s Detroit-Shoreway neighborhood 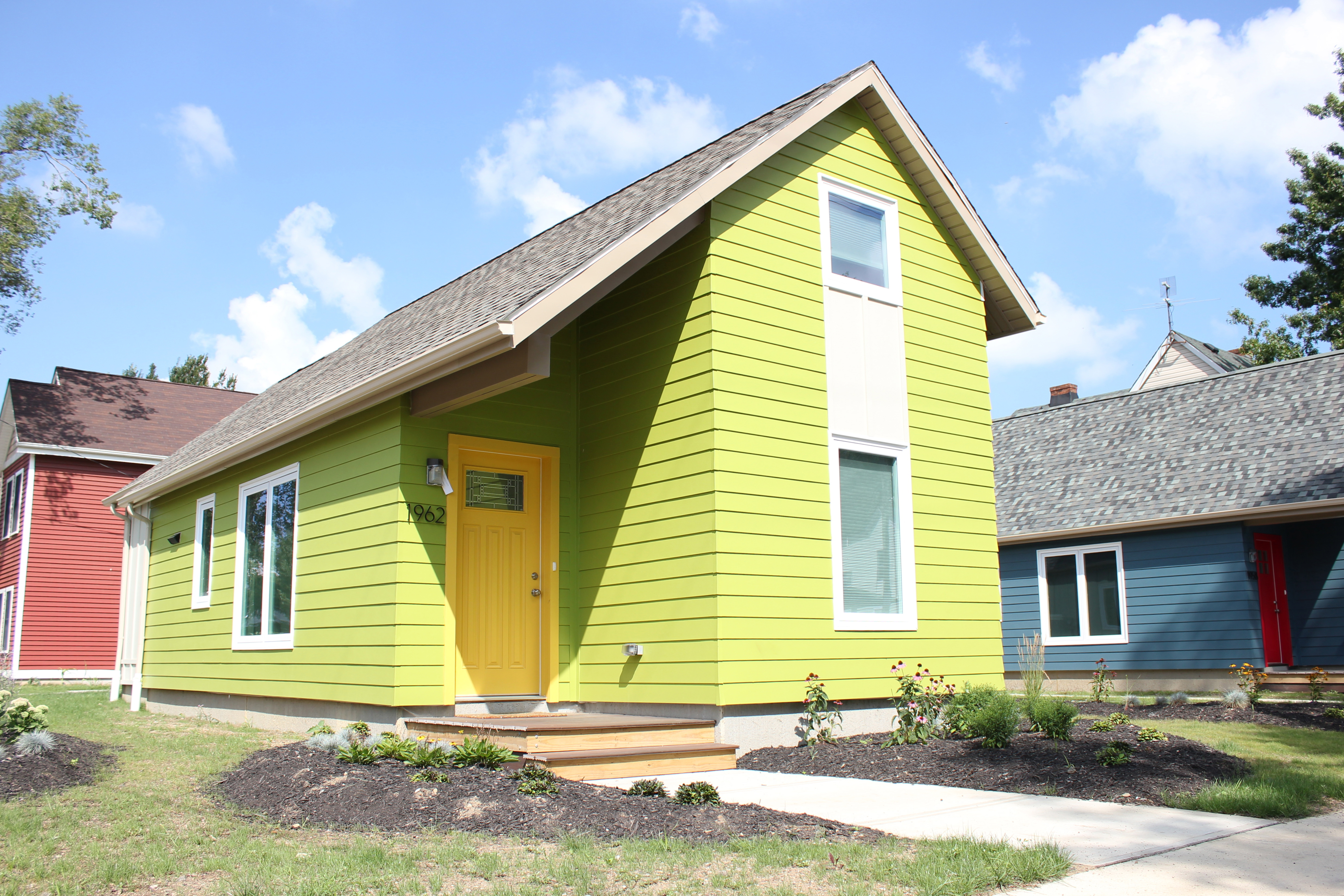 A look at DSCDO’s Tiny House from West 58th Street. 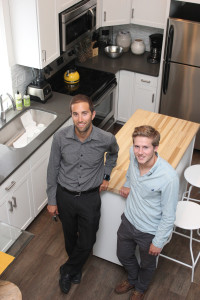 If there were only the one Tiny House, it would seem lonely, like a kid marooned in an adult party. But there are two, side by side, in EcoVillage on Cleveland’s near West Side, and together, they are poised to take organic part in an older, more lived-in locale.

“It feels good,” Adam Davenport, project manager for the Detroit Shoreway Community Development Organization, says, standing in the living room of one. “It’s, like, a very well-constructed house.”

These Tiny Houses, one owned by DSCDO, the other by Sutton Development Group, seem downright neighborly. Outfitting them with vintage furniture repurposed by Reincarnation Vintage Design, a firm in the Lorain Avenue antique district, is not only functional, it adds character. Not to mention functionality in shelving made from refinished hardware store bins and stools that open for storage.

At 583 square feet each, these sturdy, new-construction homes, the city’s first permanent Tiny Houses, may be a clue to a new, rapidly evolving direction, suggest Davenport and Adam Rosen, DSCDO’s economic development director.

The houses are an “experiment in living” jump-started by $140,000 from Citizens Bank in collaboration with DSCDO, Sutton Development Group and Matt Zone, Ward 15 Cleveland councilman. They sell with a 15-year city tax abatement.

Building them required a variance from the city requiring a house be at least 950 square feet in size. They don’t feel small. They do raise questions and pique one’s curiosity. 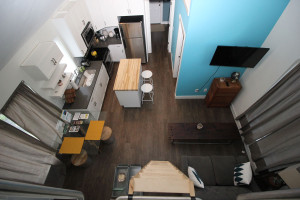 Looking down from the loft bedroom, one can see the living room, dining room and kitchen in the Detroit Shoreway Community Development Organization’s Tiny House. 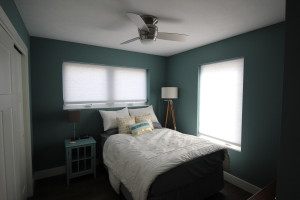 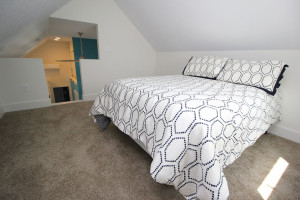 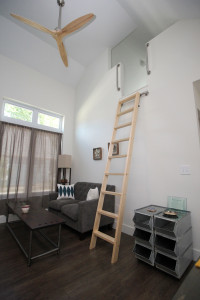 A movable ladder is used to reach both the loft bedroom, shown above, and storage units located above the bathroom entrance at DSCDO’s Tiny House. 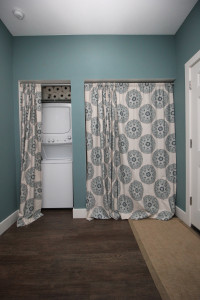 Decorative curtains to conceals a washer and dryer 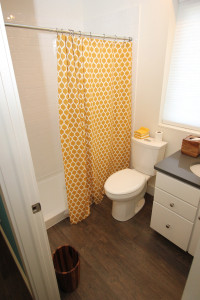 Davenport has stayed in one of these Tiny Houses. He’s also been in even smaller ones, like a 130-square-foot one on Cleveland’s East Side that sits on a trailer.

Rosen has been to a party in the Detroit-Shoreway house, a party of about 40. Everybody fit.

“We had a staff happy hour here,” says Rosen. “We brought in Frank’s Falafel and we all kind of fraternized amongst each other and it was very comfortable to have a party here after work. It was a lot of fun.

“It’s been fun showing off. It’s brought a lot of notoriety to the neighborhood online, and people are just driving by, checking it out, curious.”

DSCDO’s Tiny House has an Instagram account (@tinyhousecle), and a contingent from Snapchat took over the house during the Republican National Convention. Airbnb rented it out for $85 a night from June until Sept. 1.

There is shelving high up on several living room walls. You reach those shelves and the guestroom loft by climbing a ladder that moves around the room, clamping to a bar like library ladders do. It’s a different way of living and a different way of conceiving space. The orientation is more vertical than horizontal.

As for installing bookshelves on the ground floor, that would be tight. “You have to get all your books on Kindle, I guess,” quips Rosen.

At the same time, a Tiny House is economical and energy-efficient, with a low-flow toilet and showerhead, a tankless water heater and a wall-mounted heating, ventilating and air-conditioning unit. The foundation is insulated and the house is airsealed.

Heating and cooling the house is expected to cost $500 a year. These are “green” houses, as befits a neighborhood called EcoVillage. Centered on the West 65th Street-Lorain Avenue Greater Cleveland Regional Transit Authority station, EcoVillage is defined as the area within a quarter-mile walk of that RTA stop.

“I think this whole EcoVillage concept is a natural because of the Rapid station,” Davenport said, noting the neighborhood is ideal for housing development as people move west from the Tremont and Ohio City neighborhoods. He also cites its proximity to Gordon Square Arts District (also in the Detroit-Shoreway neighborhood), the Market District in Ohio City, Edgewater Park and Lake Erie.

“I think it’s part of the story we like to tell, of the Detroit-Shoreway and also the Gordon Square Art District,” Rosen said. “We are constantly telling our story, developing our brand, and if we can incorporate the Tiny House into that and say, hey, look, we’ve got this sustainable living, you know, and minimalism, this new way to kind of do things, it will encourage further development by individuals.”

These houses stand out, and not just for their colors. The one DSCDO is marketing, at the northwestern corner of West 58th Street and Pear Avenue, is a cocky chartreuse. The other is a more modest blue. Their tall, eccentric profiles – a crisply gabled roof, sides canted to different lengths, is their rakish “chapeau” – mark them as something different, something for the adventurous, something, largely, for the adult.

Living in a Tiny House

“I think if you’re just one person, unless you have a ton of stuff, I think it’s very doable,” says Davenport, mulling over potential buyers for such a distinctive home. “You have enough space for just yourself.”

How about a family? “I don’t know about that,” Davenport says. “That would be a preference at that point. You’re talking about a different mindset.”

“A couple would have to make some choices about how much stuff they have, but at the same time I think you’re making a healthy decision,” Rosen says. “You don’t have as much stuff, you don’t have as much clutter, you have less impact on the environment. You’re not going out and filling a house with all sorts of product that’s made in China or wherever else.”

Owners of such homes are less encumbered, making the residences ideal for the traveler, the single person, young professionals and empty nesters. They’re also natural progressions from apartments downtown.

And like the rest of the neighborhood, they attest to environmental sensitivity, a core principle of EcoVillage. Sustainability is in their DNA, and sustainability has a price.

The U.S. Census Bureau says that the average size of an average single-family home built in 2015 was 2,467 square feet. Does construction of such a Tiny House cost less than construction costs of a conventional home?

“That’s a big misnomer,” he says. “You see the shows on TV, like people building them themselves for 20 grand or 40 grand, and unless you are doing it for yourself, it’s not realistic. This house doesn’t move. It was built with labor. We paid people to do that. We’re not doing it ourselves. There are some fixed costs with construction. And hooking it up to water and sewer costs the same as a conventional house.

“The price of the house does not shrink with the size. It does not correlate.”

But occupying such a house is simplifying. It forces one to consider one’s stuff. It forces a resident to consider what he or she needs – what’s essential and what’s superfluous.

Granted, Davenport and Rosen are marketing a Tiny House, so they present it positively. But they’re also philosophical.

“I think the downsizing of your living space has become more and more common,” says Davenport, “maybe not for families, but maybe they go a little smaller.” Families may not feel comfortable in a house of less than 600 square feet, “but I think for the younger couples, single people, the empty nester, this is becoming more popular.” js 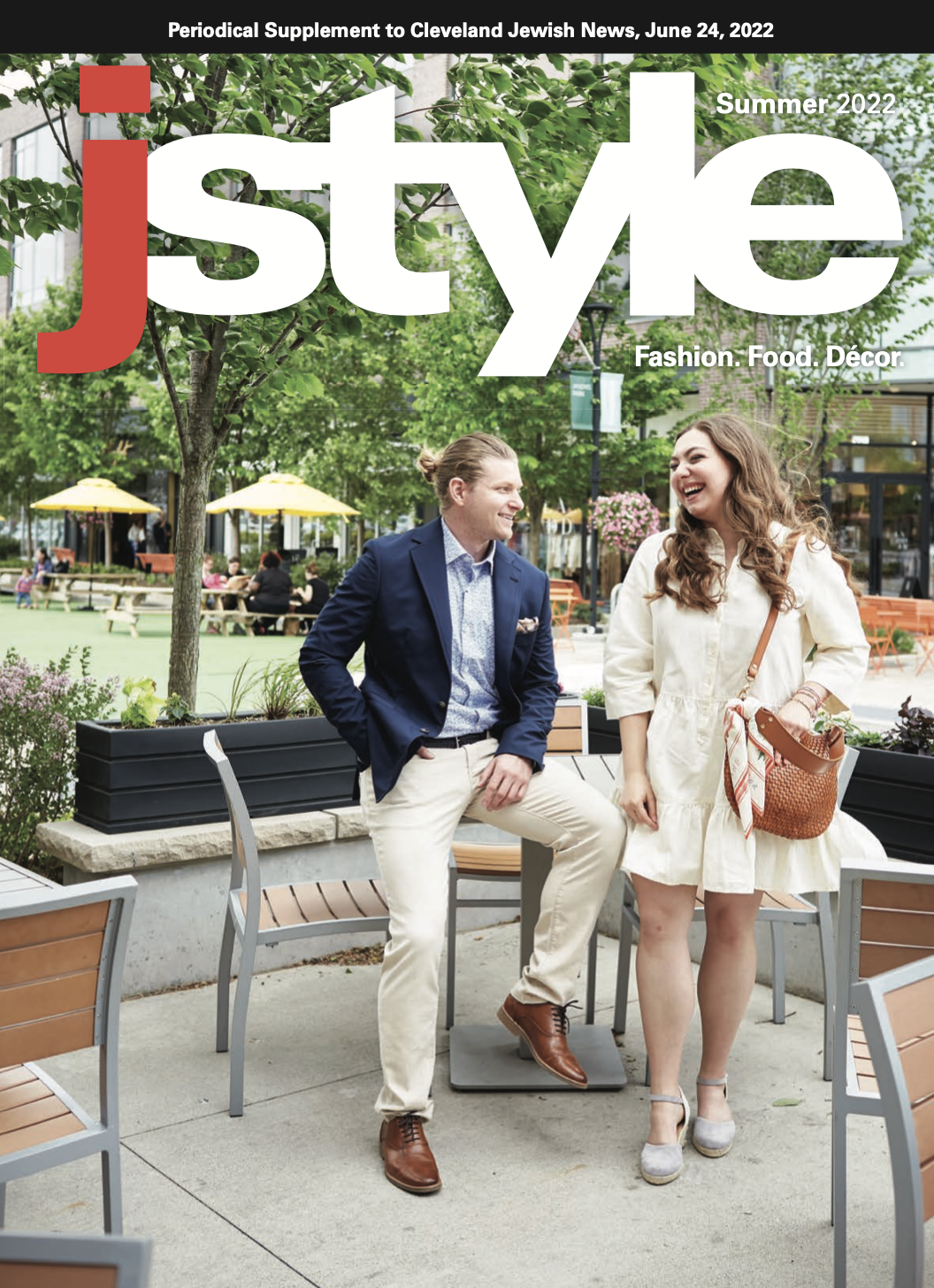