Actress Mayim Bialik makes her Orthodoxy work for her, especially in terms of style.

“For me it’s more the aspects of the ‘red carpet’ and needing to wear designer clothes that are strapless, and all those things that I don’t do and that are actually extremely stressful and difficult to work around because it is a big part of the industry,” Bialik told the Jerusalem Post about the relationship between her style and beliefs. 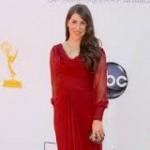 Image from the Hollywood Reporter Bialik at the 2012 Emmy Awards. 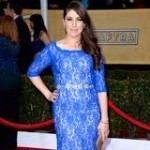 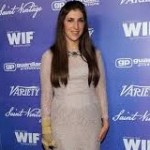 Bialik at the 2012 Variety And Women In Film Pre-Emmy Event at Scarpetta in Beverly Hills, Calif.: stylebistro.com 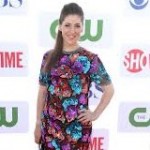 Bialik at the 2013 Golden Globes 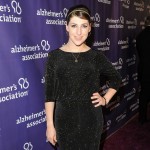 Bialik in a beaded dress at the Alzheimer’s Association ‘A Night at Sardi’s’ red carpet event: stylebistro.com

At an event at the  Osher Marin JCC in San Rafael, California, Bialik spoke about Jewish life in Hollywood and the Jewish values she keeps, including modesty.

Bialik does not wear pants outside of her home. She covers her elbows, her skirts are at least knee-length and she doesn’t wear anything with a plunging neckline.

Bialik, best known for her role as Amy Farrah Fowler on CBS’ “The Big Bang Theory,” manages to follow tzniut (laws of modesty) while still looking beautiful and chic in the latest trends.

Raised as a reform Jew in Los Angeles, the 37-year-old star received a bachelor’s degree in neuroscience and Hebrew and Jewish studies from the University of California Los Angeles  in 2000 and earned her doctorate in neuroscience in 2007 from UCLA. Bialik  is the co-founder and chair of the youth branch of the Jewish Free Loan Association (Genesis) and regularly on a variety of topics, including her journey to embracing traditional Jewish values. She studies Jewish texts weekly with two study partners.

Bialik, a regular contributor to the Jewish parenting site Kveller.com, wrote four articles in August and September 2012 about  trying to find a tzniut designer dress for her first nomination at the Emmys.

Bialik was nominated for her second consecutive Emmy award July 19 and wrote about her reaction to the nomination in her blog at Kveller.com

“I am as shocked as if you told me that Chuck Lorre had been nominated for a Best Supporting Actress in a Comedy Emmy,” she wrote in her blog post July 19. “Why am I so shocked? I don’t know; I’ll ask my therapist. I just am! I was certain I would not be nominated.”