Jewish young professionals from St. Petersburg, Russia, combine Cleveland connections with “kosher” fashion to advance both their community and themselves 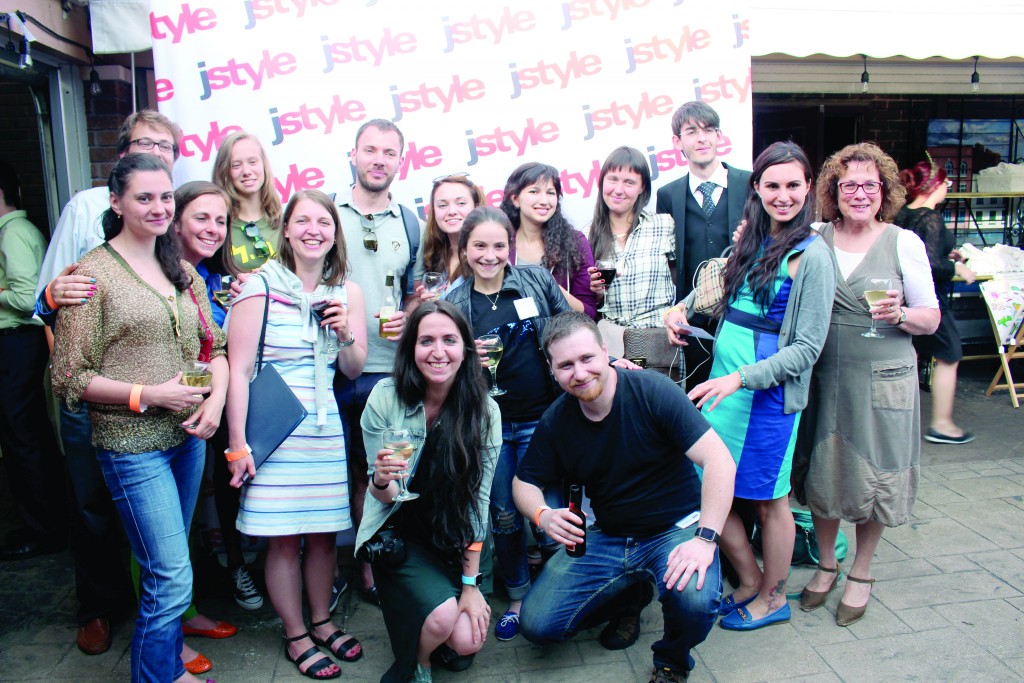 Photo by Lillian Messner I Olga Shevandronova, left, and Natalia Borisova, fourth from right, were part of the 2015 Lehava Group, the members of which attended the Jstyle Summer Nights party on June 24 at Nighttown in Cleveland Heights. At far right is Julie Jaslow Auerbach, Jewish Federation of Cleveland’s director of overseas missions and education.

With the support of her mentors in Cleveland, St. Petersburg native Lina Ladina shattered this misconception by organizing a colorful, modern kosher fashion show for the women in her rising Jewish community.

Ladina, 27, is part of a unique international partnership between Cleveland and St. Petersburg that has been cultivated for more than two decades.

Every year, young adults from St. Petersburg such as Ladina travel to Cleveland to better understand how a mature Jewish community functions. Along the way, they gain leadership skills and develop innovative ideas to bring back to their own community.

These young adults are members of the Lehava Group leadership program, which has established connections with Cleveland through a partnership between the Jewish Federation of Cleveland and the American Jewish Joint Distribution Committee, along with Cleveland’s Jewish community. Each participant comes to Cleveland with an idea for a project that will effect social change in St. Petersburg, and that idea develops as they meet with mentors in the community.

How the show developed 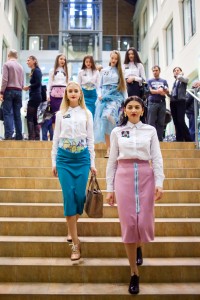 Photo by Jewish Federation of Cleveland I Models showcase Anna Geller-designed clothes at a fashion show in St. Petersburg, Russia, organized by Lina Ladina, who was inspired to make a difference in her hometown’s Jewish community by her Lehava Group visit to Greater Cleveland in 2014.

Throughout the yearlong Lehava program, participants learn about project development and management in St. Petersburg. Then they visit Cleveland to meet with professionals who mentor them.

Upon her arrival in Cleveland for the 2014 Lehava visit, Ladina’s project was still in formation. Her initial idea was to practice art therapy with at-risk teens, painting the walls of buildings in the city.

When she discovered the Russian government’s prohibition of painting the walls of public buildings, Ladina decided on using another art medium: fashion. Though she didn’t have an interest in fashion before organizing the show, she was always interested in art and design, which she studied in school.

In discussions with mentors from Greater Cleveland, Ladina decided this was the best route to take for her project, and began organizing a charitable fashion show for her community.

When she returned to St. Petersburg, Lina contacted a Jewish designer, Anna Geller. In preparing her collection, Geller traveled to Israel to talk with Orthodox women about Sniut, the laws of Jewish modesty. When she came back, she and Ladina decided to create a collection of “kosher” clothes following the guidelines of modesty.

Ladina and Geller hosted a competition for children to paint designs to be printed on the fabric used for clothing in the show.

Two winners had their designs printed on Geller’s skirts, which were vibrant and playful, rather than the typical dark shades of black, green or brown, but still longer than knee-length. Geller handmade all of her skirts, brooches and shawls for the collection, which she paired with blue and white button-down blouses bought from a supermarket.

When the collection was finished, Ladina invited media to the show and partnered with a local kosher restaurant that provided dishes for a pre-show conference. The fashion show was held for an audience of 100 in St. Petersburg’s Jewish community center, the Yesod.

“At the show, there were so many people who wanted to see another culture,” says Velichko. “They saw the kosher fashion and tasted the kosher food. It was Lina’s idea to combine everything kosher. Their idea of this show was to let people know that something kosher doesn’t mean that it is ugly or it is strange, because in our Chabad community, a lady can’t be sexy – it’s strictly prohibited. But Lina’s idea was to show that if you are kosher, you can be beautiful.”

After the show, guests could purchase Geller’s designs, and half of the proceeds went to children in need.

Volunteering for the show 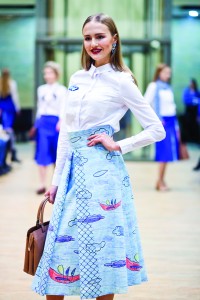 am of volunteers to help stage the show was another component of Ladina’s Lehava project. Natalia Borisova and Olga Shevandronova, who visited Cleveland for the first time June 23-29 to participate in the 2015 Lehava program along with 15 other young professionals, were two of those volunteers.

“It was like Dolce & Gabbana – everything was for real,” Borisova says of the show.

She explained that Jewish women in St. Petersburg are often stereotyped and judged based on their clothing choices.

“Unfortunately in Russia, people think that if you’re a religious girl, you should wear dark colors,” Borisova says. “The fashion showed religious girls and their families that even if you’re religious, you can be very fashionable, and there is no need to buy only black and gray.”

Borisova even bought a skirt for herself after the show.

“They were extremely maxi,” she says of the skirts. “One skirt was hemmed back, and it was crawling and put on the model’s shoulder. You could use it as your handbag.”

The fashion show was not Borisova’s first experience volunteering in the Jewish community, but she says she gained a better understanding of the role of religion in St. Petersburg.

Shevandronova, who helped the models change their clothes for the runway, dove into a new experience when she signed up to volunteer for the show.

“For me, it was my first experience volunteering, and I’m happy it was in fashion,” she says.

Now that she’s had a taste of volunteer work, Shevandronova is inspired to continue.

“It gave me a push to start volunteering and to understand that it’s a really interesting thing and what I need to do now,” she says. “I feel like I can’t stop.”

Ladina came to the U.S. troubled and unsure of herself. She was experiencing problems with her family and wanted to work on personal development.

“After Lehava, things got better, and from that time she realized that she could do something really serious and really great,” says Velichko.

In Cleveland, she learned how to build and communicate with a team and ask professionals for help. She says the trip helped her understand how the community functions and how professionals and lay leaders work with volunteers.

“After the war and after all the oppression, we do not have such an experience in our country,” says Velichko. “Nowadays, our community is rising from the ashes, so it’s really like taking a baby’s first steps.”

Ladina, who volunteered in shelters before Lehava, expanded her involvement in community life after the program and became the project manager of the volunteering sector in the Yesod. Visiting Cleveland helped her to realize how she could be useful to those in need.

“It was the beginning of friendships, even international friendships, which is quite important for Lina,” says Velichko. “She says that she wouldn’t get all these things without Lehava. So it’s not just kosher fashion. She’s still leading with the idea of creating something from art for the teens in need. Lina nowadays is going to shelters, to the orphans, where they do some projects with them, and she’s also very active in our community. So it’s tikkun olam.” js

When communist rule collapsed in Russia in 1991, the Jewish Federation of Cleveland jumped in to offer assistance to the country’s communities in need.

The Federation also recognized the opportunity to educate the Jewish people of St. Petersburg, who had been suppressed by communism for 70 years.

“I’d like to liken the situation in St. Petersburg as if when communism came in in the early part of the 20th century, members of the Jewish community were hit on the head,” she says. “They got amnesia, and they had to tuck the Judaism away. They couldn’t be Jewish. When communism fell, it was as if they were coming out of this coma.”

The Federation now provides St. Petersburg with identity programs, camps and leadership efforts such as Lehava, which has been funded by the Federation for at least 10 years, Auerbach says. Annual visits to Cleveland began three years ago. In the past, the Russians had traveled to Israel.

“What happened was they decided three years ago that they’re a diaspora Jewish community,” Auerbach says. “Why are they going to Israel? The comparison is not there. They should come to the diaspora in the United States. So initially, they came to us and then they went to New York, and they did that for two years. Last year, they had the ‘aha’ moment where they decided there’s nothing in New York that isn’t in Cleveland. So they came here.”

As Cleveland works to strengthen young leaders in St. Petersburg, Auerbach says that Cleveland leaders in turn are being strengthened. A group of Cleveland young professionals sit on a committee that helps the Federation with Lehava’s itinerary and creation of events.

“It’s a difficult time now,” says Auerbach. “There’s a lot of criticism of Israel. But to learn about Jews who are struggling to maintain their Jewish identity is very powerful for young people here.” js