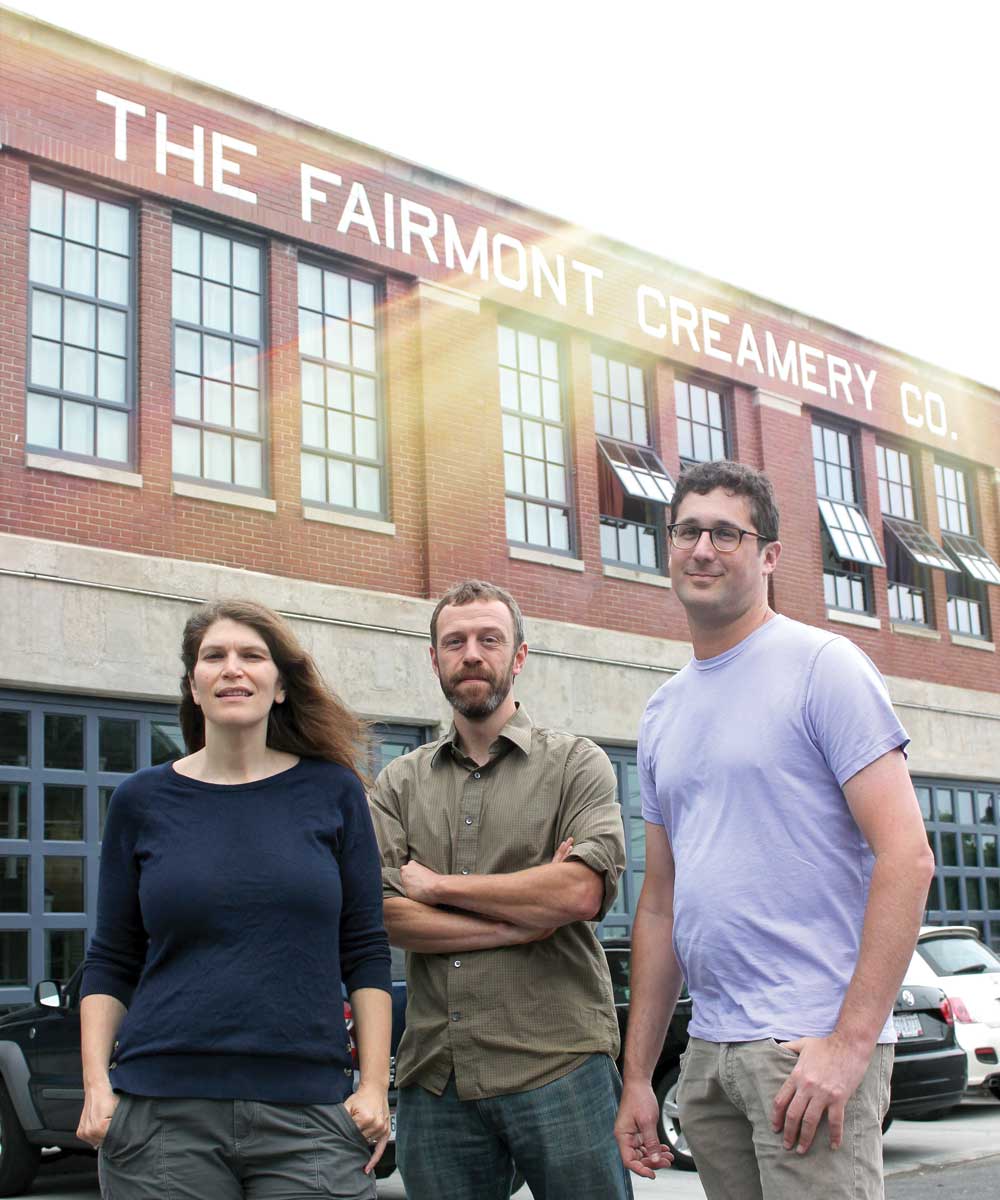 Built into a hillside, sloping into a trough between Tremont and Ohio City, the Fairmont Creamery looks like a curiously friendly fortress. The view of downtown Cleveland from its rooftop is panoramic. There’s a garden up there. And deck chairs. The former creamery is a testament to the region’s industrial past and, its developers hope, a catalyst for future development on Cleveland’s near West Side.

The economy that drove the sturdy 1930 factory as one of four branches of a national dairy operation no longer exists, and the creamery ceased nearly 40 years ago; now, however, the structure has been radically retrofitted, roaring back to life late last year as a mixed-use development that in itself is a virtual, self-contained neighborhood.

Josh Rosen, Naomi Sabel and Ben Ezinga – all 30-ish, all Jewish – transformed the rugged structure and revel in its stylistic mash-up. These Oberlin College graduates, who cut their development teeth in that city 35 miles west of Cleveland early in the millennium, are particularly proud to have brought their $15 million Tremont revival to fruition in two years.

They caught their first glimpse of it in 2012. In late 2014, the first tenant moved in to one of its 30 apartments. It’s fully occupied now. The five-story, radically revamped structure has been profitable from the day it opened, according to Rosen, who, along with Sabel and Ezinga, formed Sustainable Community Associates after graduation (Rosen and Ezinga graduated in 2001, Sabel the following year).

Anything but hierarchical, they are very much a team.

“We do everything,” says Rosen. “We don’t want a lot of infrastructure.”

The Fairmont Creamery project was complex indeed, with numerous entities involved in its financial underpinnings. But it also moved along nicely, and as for political battles, there were none; all three say city and county officials were more than supportive.

That differs from their experience at Oberlin, where they were known as “the kids,” developing the East College Street Project, a $17 million, 100,000-square-foot development mixing residential, commercial and office the trio launched in 2002.

East College Street may have been more challenging, at least partially because it was their debut. It involved a brownfield cleanup (as did the creamery project), securing Oberlin’s first Tax Increment Financing (TIF) bond and overcoming resistance from city politicians skeptical of the recent college graduates.

Rosen, Sabel and Ezinga are in their mid-30s now, with East College Street behind them and the Fairmont Creamery a fresh success. They’re already involved in a second Tremont project: A 150-apartment repurposing of the Ohio Awning & Manufacturing Co. building at Scranton Road and Auburn Avenue that SCA bought last fall, about a month before the Fairmont Creamery opened.

I think we want (Fairmont Creamery) to be an asset to the neighborhood in a way that a truly residential project is somewhat limited. – Naomi Sabel 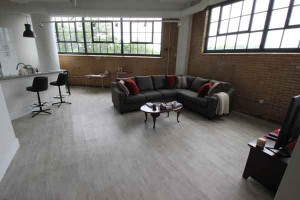 “We want a flow of people throughout the day that is different,” Sabel says.

The building, constructed for the 40th anniversary of Omaha-based Fairmont Creamery, was a national hub with two floors for manufacturing and space for 75 delivery trucks; a period photo – black-and-white – adorns a wall at the entrance. Its use is far more mixed now.

The overriding idea behind all their projects is sustainability, Sabel explains.

“I think we want it to be an asset to the neighborhood in a way that a truly residential project is somewhat limited,” she says.

That’s one reason they reserve a portion of their apartments for lower-income residents. At Fairmont Creamery, for example, six one-bedroom units of the 30 apartments rent for $700, $400 less than the $1,100 market rate.

The ceilings in one apartment are high (they range from 13 to 18 feet), the HVAC piping is exposed, the exterior walls are the original glazed yellow brick, the floors are matte wood, and the multi-paned windows are not only functional, they open up the place. The palette spans the tawny and the earthy, the textures are muted, the feeling inviting. High style, low impact.

Giant pillars communicate strength and durability; this building was clearly meant to last. 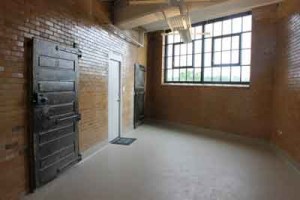 Like its apartments, Fairmont Creamery’s hallways display the building’s character. Pictured at left, to the left of a white residential door is a larger door that once led to one of the creamery’s freezers.

The open floor plan, which makes the living room and kitchen area a continuous space, underlines the airiness of the place. While the apartment design stresses its industrial roots, the lifestyle it encourages – fortified by state-of-the-art furniture and appliances – is ultramodern. The repurposing is creative: what used to be walk-in coolers are now bedrooms.

The notion of mix extends to the residents.

“I would say there’s a series of anecdotes rather than demographics,” Rosen says of the tenant mix. There are young professionals who work downtown. There are medical residents who work at the Cleveland Clinic or MetroHealth Medical Center. There are a social worker and a graduate student with annual incomes of less than $35,000 who occupy those discounted one-bedroom units.

That income differentiation makes SCA projects more appealing as public-private ventures, Rosen suggests. “It’s just something different that brings more support to the table from our partners,” he says.

And it reflects their ethos. “Just programmatically, it’s really what we want to do in a neighborhood,” says Ezinga. “We don’t just want to make opportunities for people who can afford to pay $1,500 a month. It’s nice to have diversity” so tenants of different incomes “can be in these neighborhoods even as we gentrify.”

Fairmont Creamery’s rooftop deck affords great views of downtown Cleveland while offering residents space to socialize and plant small gardens.The creamery, on West 17th Street across from the Cleveland Animal Protective League, sits in the “gap” between the hearts of Ohio City and Tremont “and it makes the neighborhood as a whole seem healthier,” says Rosen. Less than a mile separates the two revitalizing Cleveland neighborhoods. There’s work to do to unify those areas. The creamery is intended as a major step.

“I need to be able to walk from Tremont to Detroit (Avenue) and 65th (Street) on good sidewalks and infrastructure that belongs in the 21st century,” says Ezinga, referring to the Gordon Square Arts District in Cleveland’s Detroit-Shoreway neighborhood. “You’ve got to connect these neighborhoods instead of having all these Balkanized areas.”

Sabel says she wants to see the near West Side of Cleveland be more than “pockets of revitalization surrounded by weak connective tissue”; Rosen views the creamery “as a bridge.” When they first came across it, it was largely abandoned and there were problems with squatters and break-ins. It separated areas rather than united them.

The historic tax credit project required the three to do extensive research into the building, including its architecture; after all, they had to figure out how to divide up the spaces, Sabel says. They also had to figure out and then amass their income stack.

“We don’t have a stack so much as we have a web,” says Ezinga.

As for their personal investment, there’s more “sweat equity than real equity,” Sabel says. “The fantastic thing is we put it together in less than a year. Then construction took about a year.”

All that purpose and focus has paid off, linking Cleveland’s industrial past to a more metropolitan future. js