Nearly simultaneously, Anthony Zappola and Jeremy Umansky ushered in a new wave of nosh for Northeast Ohioans to savor 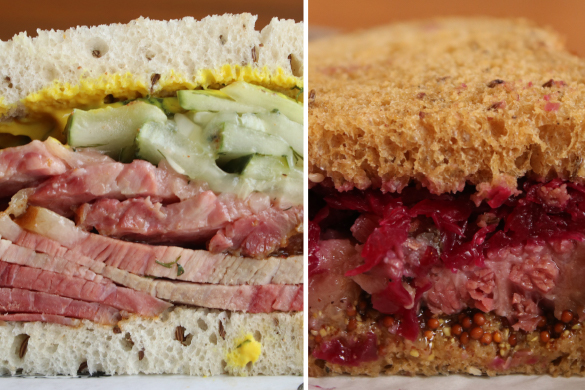 Left: The “Upper East Side” from Lox, Stock & Brisket, which is cured and smoked brisket with cucumbers, dill and mustard on rye. Right: A pastrami on rye with mustard and saurkraut from Larder: A Curated Delicatessen and Bakery.

Anthony Zappola and Jeremy Umansky didn’t really know each other until a few years ago, despite both growing up on the East Side and going on to become top-shelf chefs. Parallels between the two don’t end there.

Now, both are overseeing their own restaurants in Greater Cleveland – and they opened within a week of each other. 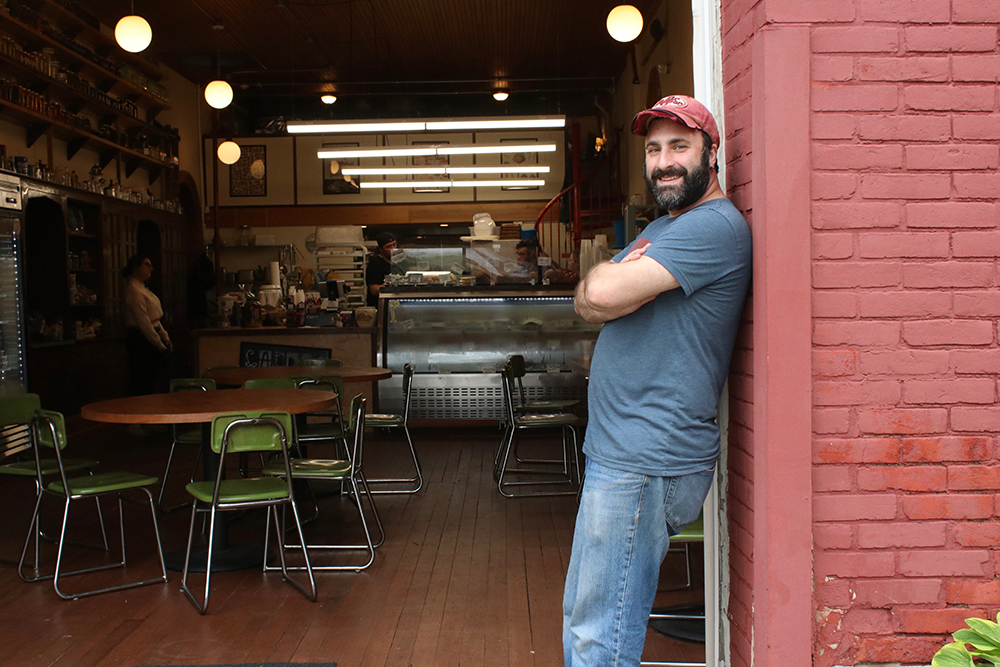 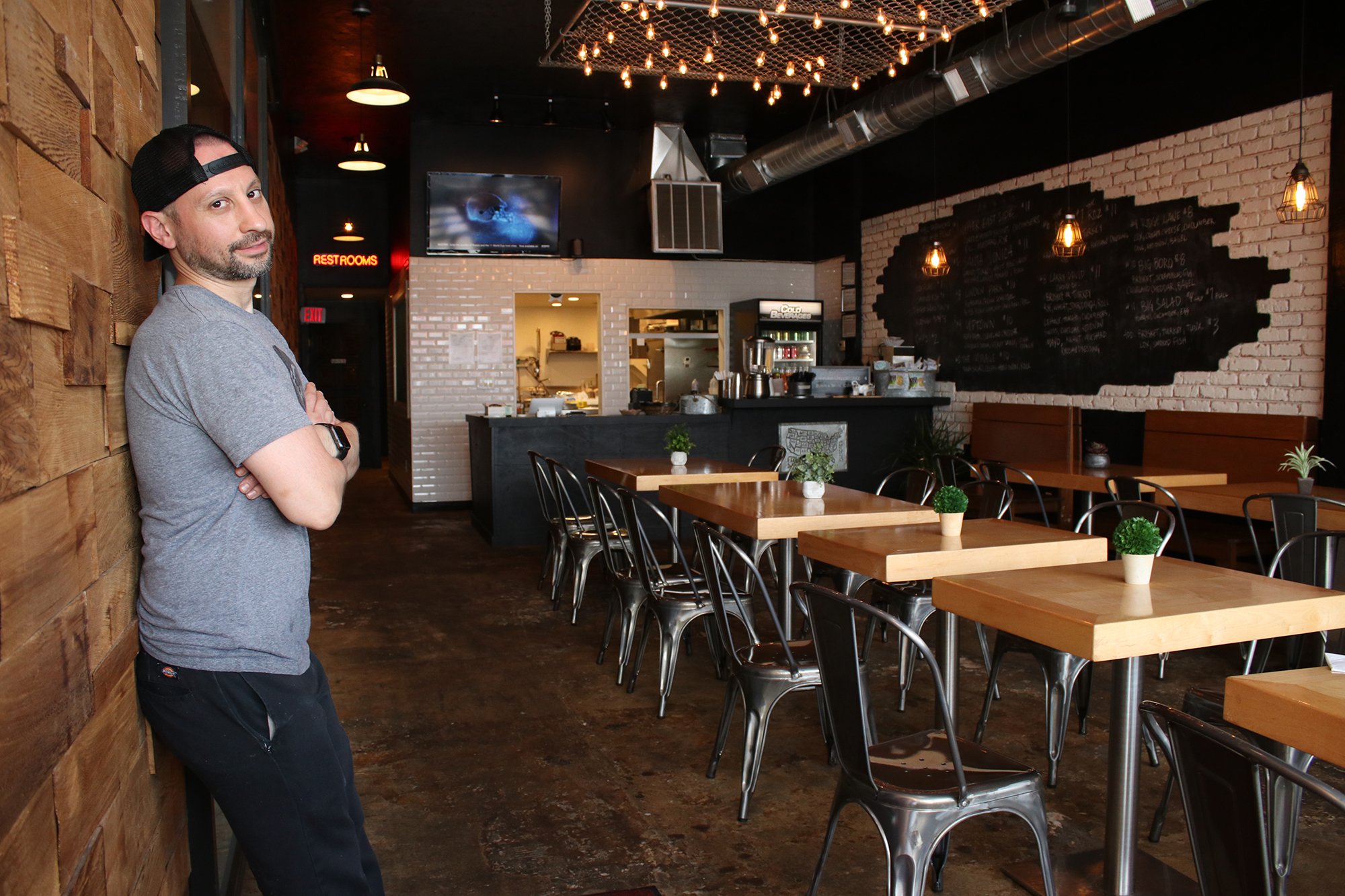 By all accounts, both restaurants have gotten off to great starts – and that’s not the only similarity. For instance, both are at least partially influenced by the “new Jew deli” concept, though neither is kosher, and Umansky and Zappola say they aren’t trying to completely emulate the movement.

And notably, despite the potential overlap in business, the chefs admire and share a healthy respect for each other. 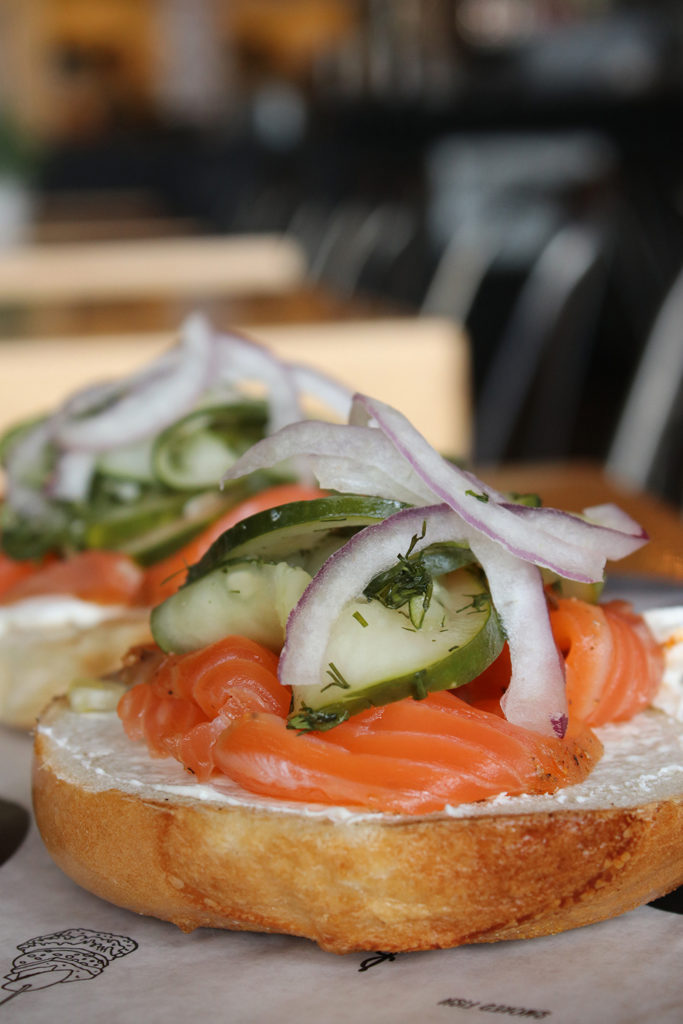 The “Ridge Lane” from Lox, Stock & Brisket, which is lox, cream cheese, cucumbers, dill and red onion on a bagel from Bialy’s Bagels.

Zappola, 38, says he wasn’t trying to tap into the “new Jew deli” trend, that wave of artisanal delis that apply innovative approaches to classic dishes and old-world recipes spreading across cities like New York, Chicago and Washington, D.C.

In fact, he wasn’t necessarily planning on opening a deli.

“I think that the space sort of determined what the content was going to be,” he says. “I always say there’s a lot of room for interpretation, there’s a lot of ingredients, there’s a lot of technique that you can use and just sort of be creative with it, so there’s room for growth. That’s why I like it, more than anything.”

The location – in one of the many plazas that line the south side of Cedar Road west of Warrensville Center Road – was previously a meat smoker-equipped barbecue joint.

“The equipment was already here,” Zappola says. “The location of what it was and (with) the décor, it sort of looked like a sandwich shop. The smoker was obviously a big part of it, so then I said, ‘OK, well, we’re going to smoke our own meats.’”

After deciding to scrap any ideas of doing his own barbecue, he landed on transforming the space into a delicatessen. He says Lox, Stock and Brisket serves items he would call “recognizable, but not traditional.”

The menu at Lox, Stock and Brisket, while filled with flavors, is intentionally short, consisting of 10 sandwiches and a handful of side options. That design fits Zappola’s philosophy on food: serve the best quality product you can, don’t cut corners, have fun, be creative and don’t overthink it.

“We do 10 sandwiches and that’s what we stick to,” he says. “Stick to what it is, do as much as you can in-house, within reason. Obviously, I don’t make my own bread – I don’t have the capabilities (to do that) – but all the pickles and stuff, for the most part, except for the pickles served on the side, I make in-house. I buy my own cucumbers that are served with sandwiches, and I make all of our sauces from scratch.”

So far, the only surprise for Zappola has been how thankful customers have been.

“We get a lot of ‘thank yous’ for bringing a Jewish deli back to Cedar Center (and) for bringing something interesting to the East Side,” he says. (Corky & Lenny’s original location was at Cedar Center from 1956 to 1994.)

“When we first opened, I thought we would just get into our target audience, (which) was just a small group of people, (but that audience is) much more diverse than I thought – (many) more locals and people that have been going to delis for a long time,” he says. “The older clientele, they like it because it’s traditional in some sense, they know exactly the flavors that they’re getting. It’s just quality ingredients, and they know what it is and they’re happy for it and they live in the area – and we haven’t even scratched the surface (of what we want to do).” 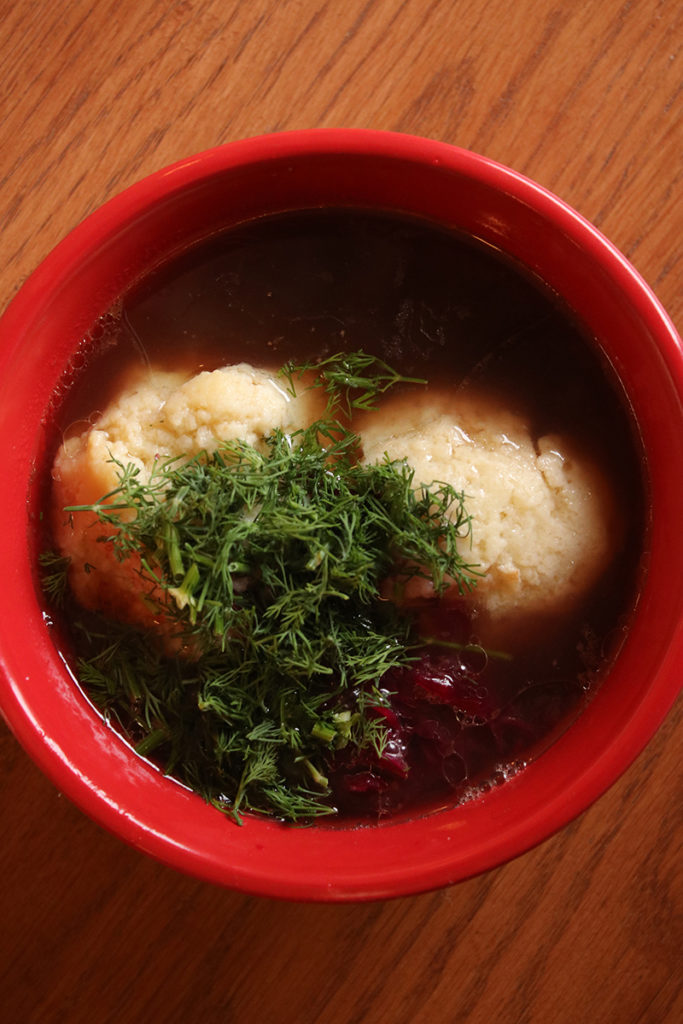 Matzah ball soup from Larder, made with chicken stock, dill and sauerkraut.

Umansky, 35, says he – along with his partners, wife Allie La Valle-Umansky, a baker and pastry artist, and chef de cuisine Kenny Scott – were very deliberate about calling Larder a “delicatessen” as opposed to a “deli,” for various reasons.

“The main reason being we wanted to emulate and hearken back to what a delicatessen was 125 years ago,” Umansky says. “This counter-driven service, cured meats and pickles made in-house, not bought elsewhere and then cooked off.

“We also wanted to have this feeling of a general store, (because) that’s what the original delicatessens were. In Europe, you find delicatessens that are very much like this. We wanted to emulate that,” he says. “We feel that ‘deli’ is a concept that grew out of the ’40s and ’50s diner culture. They’ve got these huge menus, 10 pages long and you can get anything you want at any time. That’s not exactly what we were going for with this concept.”

Umansky says he and his co-owners feel “modern archaic” is the best descriptor for their approach at Larder, which is nestled between Rising Star Coffee Roasters and the Transformer Station in Ohio City’s Hingetown district.

“Essentially, we’re using methods and techniques that in some cases are (about) 7,000 years old to create foods with modern sensibilities,” he says. “We’re using these ancient practices to breathe new life into food.”

He cites Larder’s pickles, particularly its Hungarian pickle, as examples of this style.

“(Fermenting our own food) used to be something all families did all the time, as little as 60 years ago. … In the past 60 years, we haven’t been doing these things, (it’s) getting a little lost or misconstrued,” he says, explaining his “modern archaic” approach helps fill that void. 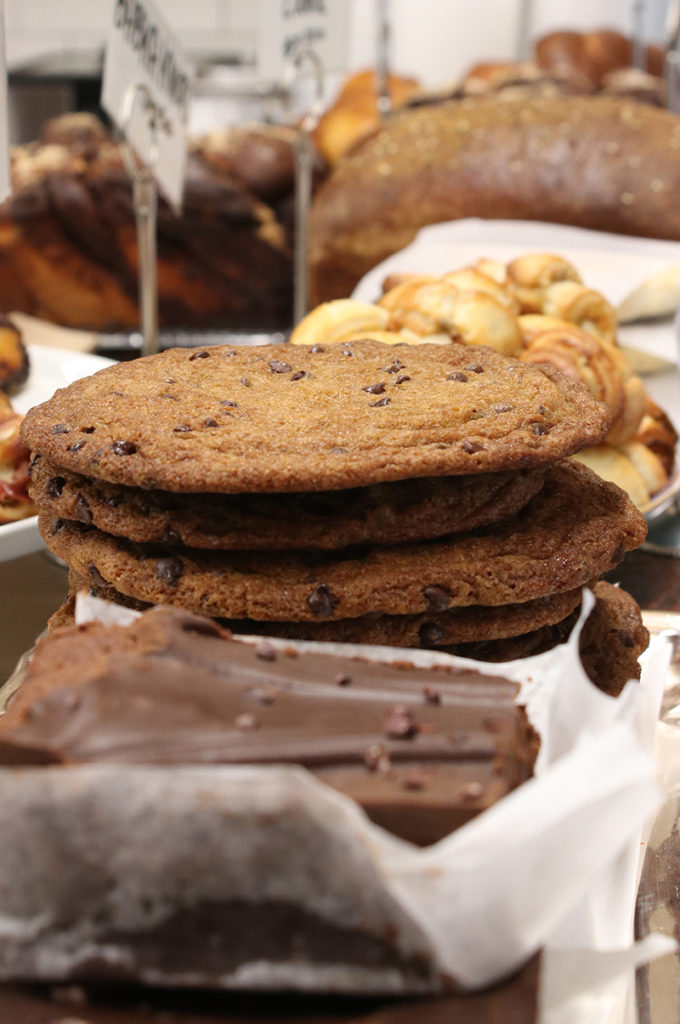 An assortment of sweets available at Larder.

Umansky, a member of The Temple-Tifereth Israel in Beachwood, has heard people call Larder a “new Jew deli,” and though he’s familiar with the term and doesn’t mind when it’s applied to Larder, he considers it neither “new Jew” nor a “deli.”

“When we opened, we took the stance, especially when we settled on a West Side home, that we were going to be an Eastern European delicatessen,” he says. “We got feedback from people in this immediate area that they weren’t sure what a Jewish deli was. Some thought it was just for Jewish people, some weren’t sure what the associated foods were.

“When we kind of look at what Jewish food in America is, virtually all of it, outside of Middle Eastern and Mediterranean cuisine, is Eastern European. So, we decided if we broaden ourselves and kind of encompass that whole Eastern European feel, we wouldn’t be persuading anybody or confusing anybody,” he says. “Those people who know what a Jewish deli is, they’ll walk in here and say, ‘Yes, this is a Jewish deli.’ The people who don’t, they’re going to come in and be like, ‘Oh, this is Eastern European food.’”

Most of the recipes used at Larder are essentially family recipes, occasionally tweaked for more modern pallets or cooking techniques, but still derived from recipes handed down in the owners’ families. As an example, Umansky cited Larder’s southern fried chicken sandwich, which was a recipe from Scott’s family.

“We’ve got this killer fried chicken sandwich,” he says. “The flavor profile of it is (has) kosher dill pickles and we’re putting a dressing that is essentially sour cream and dill on the sandwich. It’s similar to ranch but not quite. We’ve all taken these aspects of our family heritage.”

Meeting in the middle

Despite having all the ingredients for a delicious rivalry, Umansky and Zappola have formed a friendship.

In fact, the two often joke they should trade houses or restaurants to shorten their respective commutes. Zappola, an Ohio City resident, lives just blocks away from Larder, and Umansky’s Cleveland Heights home is only a stone’s throw from Lox, Stock and Brisket.

Lox, Stock and Brisket’s “The Mirage,” made of tuna salad, celery, red onion and lettuce on an egg roll from Unger’s Kosher Bakery and Food Shop in Cleveland Heights.The mutual respect the two share is evident, and they have only glowing things to say about each other.

“He is as talented as they come,” Zappola says of Umansky. “Jeremy takes it to the next level. (Larder is) far more intricate than us. He’s got another whole level of research and development into this concept than I do. He’s obviously very talented, very
well-respected. … It’s an inspiration for me to see him and see where he’s taking these ideas and this concept.

Umansky welcomed Lox, Stock and Brisket, and doesn’t see the dynamic between the two eateries as a competition.

“He’s a culinary badass, there’s no ifs, ands or buts about it,” Umansky says of Zappola. “I couldn’t think of another chef that gets deli culture in general, whether it’s an Italian deli or Jewish deli or whatever it is, better than Anthony. To open up a place at the same time as us, it’s great.” js