By leaving behind a career in architecture in China, Aaron Jacobson hopes to spur high fashion in Cleveland 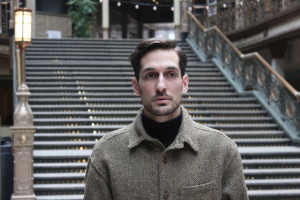 PHOTO | Michael C. Butz | Aaron Jacobson in front of the stairs at The Arcade Cleveland in downtown

A few years ago, on his way to work every day at a Shanghai architectural firm, Aaron Jacobson navigated the fabric market of that enormous and cosmopolitan Chinese city. Absorbed by the lore and wonder of textiles, he began to consider a career change, from architecture to fashion.

Fashionably late to the scene? No. The 31-year-old Pepper Pike native already is turning heads – including those at the New York Times, which featured Jacobson’s work in its Sunday magazine in February – with his unique feel for the soft, sleek touch and rigorous architectural schooling.

Jacobson has spent the past two years developing FAAN, his clothing line. It’s unisex, ultramodern and minimalist. It also evokes China in its muted colors and relaxed collars. Faanware is soft-power architecture for the human form. It’s also produced in Cleveland.

Jacobson lived in the Cleveland area until he was 18, and “I bought my clothes at the mall like anyone else,” he says. “That’s the culture that Cleveland allows for. It’s just breaking a little bit, I hope, and I’m here because I want to be a part of that. But it’s a very slow process and it requires a lot of faith in sort of changing tastes, broadening … .

“There’s so much pride here, so much civic pride and local pride, and I see that manifesting itself in inspiring ways in other industries in town. It hasn’t infiltrated the design culture, and that void has been filled by a sort of kitsch aesthetic. We have no shortage of ‘I Love Cleveland’ T-shirts, or ‘Cleveland Is My Paris.’ I’m bothered by Cleveland’s insistence on presenting itself ironically, as a derivative city.” 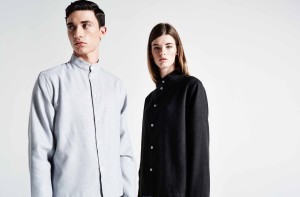 Even as a kid growing up in Pepper Pike, Jacobson knew he wanted to be an architect. He became a very worldly and sophisticated one after completing undergraduate work at Washington University in St. Louis (B.A., architecture) and earning a master’s degree in the field from the University of Toronto.

Now he is a clothing designer committed to expanding the very notion of fashion with his refined, middleweight clothing. Faanware consists of ultramodern shirts, skirts, coats, T-shirts and jackets, and all the pieces look like they’d be comfortable on anyone. At the same time, they’re decidedly understated and form-fitting.

“I identified as an architect from when I was young and spent a decade of my life working it, and very abruptly, I found something that made me happier. It was hard for me to admit that to myself, to reconcile that,” Jacobson admits of his career change.

While his clothes have a sort of mission, his decision to follow fashion and abandon architecture, his first love, still troubles him. However, clothing design also speaks to him personally: his great-grandfather was a pattern grader in the heyday of the clothing industry in Cleveland about 80 years ago, and now he seeks to create a Cleveland fashion style of the city’s own.

“When I moved back from China about two years ago, I assumed I would settle in New York,” Jacobson says. “I had spent significantly more time there than in Cleveland during the course of my 20s. I started reaching out to factories in New York, in Cleveland, in Chicago, in Los Angeles, in Portland; they are starting to spring up again. I would say there’s a cautious but optimistic trend toward U.S.-made clothing production.”

The usual course is to conceive an idea in the U.S., then outsource its manufacture to China. You could say Jacobson has done the reverse. Now all he needs, besides business growth, is local acceptance – which, given Cleveland’s limited fashion sense, may be challenging.

Jacobson could have kept Faanware production in China, where he’d developed relationships, “but there is something to developing in Cleveland. I felt like I had the beginnings of an idea, potentially a business, and I saw an opportunity to partner with Cleveland in a way that could be profound and more meaningful.

“I went in the reverse, and that was a very conscious decision.” 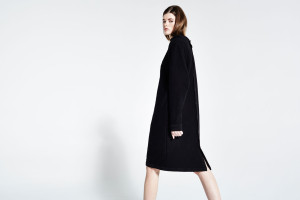 He chose that path after a brief architectural career in China, starting with six months in Beijing in 2012.

After earning his master’s degree in Toronto, he landed a job with a small design firm in Beijing. He didn’t speak Chinese and didn’t have a place to live; all he had was that job. He spent most of his time there working on a proposal designed to dissuade the government from tearing down historic alleyways in Beijing called hutongs.

The proposal went nowhere; the experience was disillusioning.

“Our proposal to the Beijing government was largely discounted and, to my knowledge, some of our study area was already destroyed and replaced by a shopping center,” he says. “It was very meaningful work for me, and came to a heartbreaking conclusion. I did develop a louver system for an office building in Inner Mongolia during my time there, as well. In addition to blocking direct sun, the system had to protect against frequent sand storms.”

After Beijing came Shanghai, where Jacobson worked with a Danish design company developing an art museum. Since Jacobson’s dream as a boy was to design a museum, the Shanghai gig seemed providential. It also proved to be his last job in that field.

“It was during that time that I discovered fabric as I was walking through the fabric markets on my way to work each day, so I got in the habit of designing clothing sort of secretly from my architecture desk, hiding my sketches under my drafting board,” he says. “They were hard to hide after a while. It started purely out of fun, just my own desire to be designing and executing those designs much more quickly than I could as an architect.

“I worked on that art museum for eight months. During that time I was able to design my first 50 items of clothing. There was an immediacy that was thrilling to me. Eventually, I changed my career path.”

Slipping into clothes of his own design convinced Jacobson he’d made the right choice. 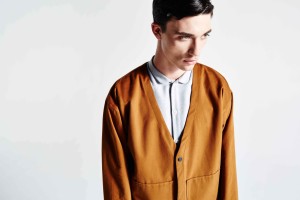 For now, Faanware is available through the Faanware website and at select outlets, none of them in Cleveland. Jacobson has an agent in Los Angeles meeting with potential buyers of his fall-winter 2016 line, and he’s developing his 2017 spring-summer collection. He’s also curious to see whether recent media attention, including that New York Times feature, generates bigger business from buzz.

“My market is evolving,” he says. “That may be somewhat my own fault as I haven’t put too fine a point on my sales demographics. I haven’t been interested in marketing narrowly to any particular lifestyle or age group. In fact, my clothes are gender-neutral; I’m not even marketing to men or women specifically. My clothes are very minimal. They’re thoughtful, they’re simple, they’re well-made, and I think those elements sort of self-select my market. People are drawn to those things and I’m happy when they find me.”

He certainly seems to have found himself – and his uniqueness.

“My pieces are so streamlined and minimal, I guess (they make) some people feel uncomfortable,” he says. “For whatever reason, Cleveland hasn’t adopted that design mentality. I want to help establish Cleveland as part of a broader design network, nationally and internationally.

“I’m trying to lead by example and I hope it won’t spell my downfall. That’s the idea.”

Jacobson values originality and his clothing is indeed original. He conflates the urban and the urbane, reflecting his abiding interest in urban planning and policy.

Even in China, he kept up with home, reading about development in Cleveland and sometimes “feeling angry, frustrated – and a sense of responsibility to this place,” he says.

“I’d like to contribute to Cleveland’s rebirth and that’s why I’m here.” js