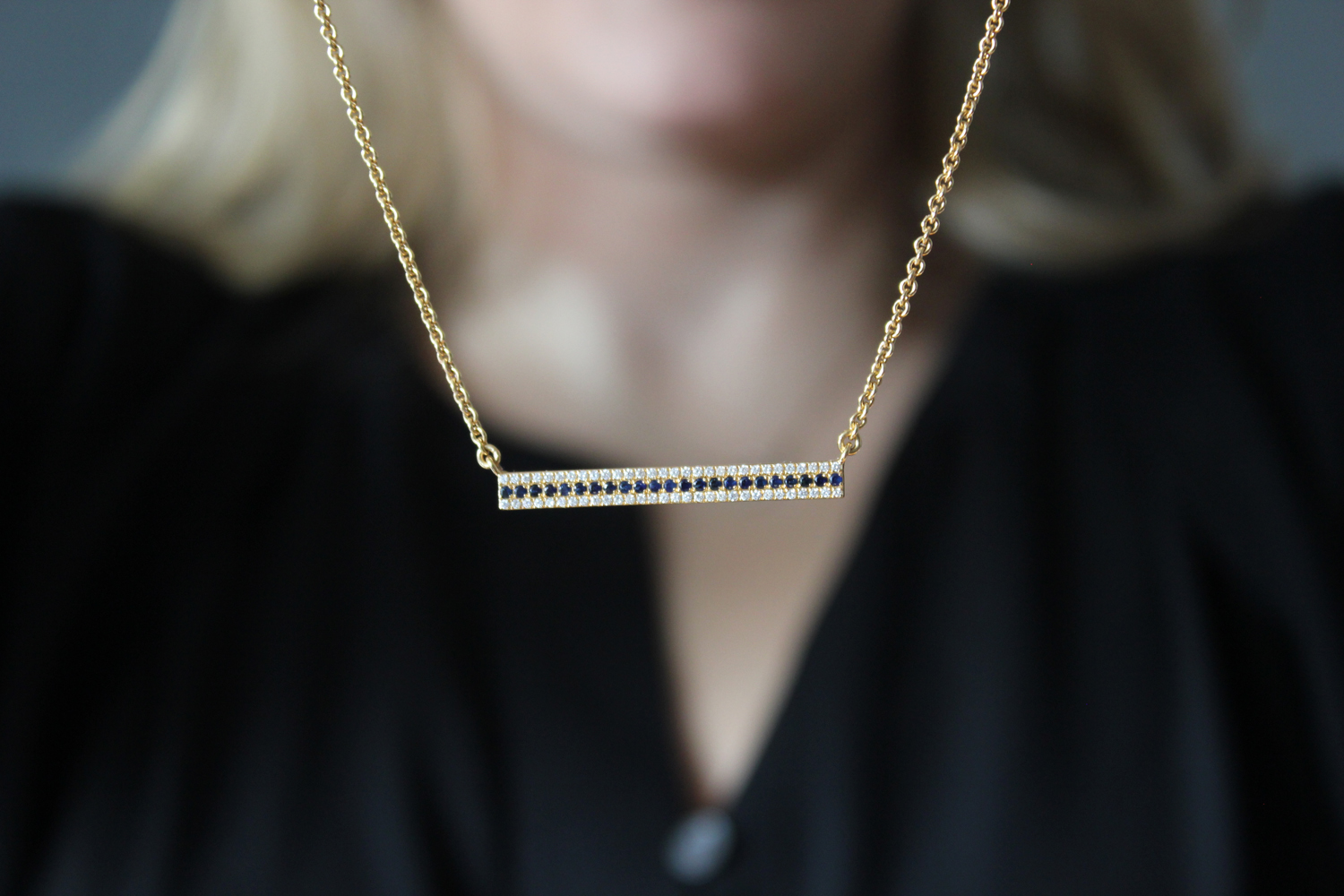 An 18-karat yellow gold diamond and sapphire bar necklace made by Synenberg. 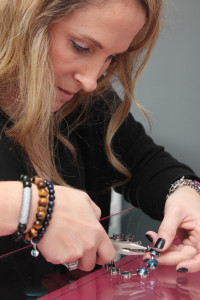 One night in February, Jamie Synenberg was browsing Facebook when she saw a post about a fashion trip to Israel with a group called the Jewish Women’s Renaissance Project. At the time, the 37-year-old Beachwood resident was mostly a stay-at-home mom, doing part-time work in the jewelry industry. She always loved semi-precious stones and had started to think about starting her own jewelry line, but the competitiveness and lack of kinship between colleagues in the industry bogged her down. She needed something to shift in her mind.

“I knew immediately that that was the trip I needed to get on. It just spoke to me,” Synenberg says. “Without even speaking to my husband, I applied to go on the trip.”

After a long interview process that began with hundreds of applicants, Synenberg was one of only
35 women chosen from around the world to spend eight days in Israel this past July. There, she became immersed in Israeli fashion and culture and connected with women who changed how she saw her place in the jewelry world – and inspired her to revisit, more purposefully, her jewelry-making interests.

Growing up in the business

Synenberg’s late grandfather, Holocaust survivor Saul Gottlieb, founded the Cleveland-based fine jeweler, Gottlieb & Sons. Her father, Jeff Gottlieb, continued the family business, which Synenberg grew up around. However, she found her own inspiration in colorful semi-precious stones early on. When she was in elementary school, she learned about gems and minerals and was immediately drawn to them.

“I would save all my birthday and Chanukah money to go to gem and mineral shows and buy semi-precious stones,” she says.

In high school, Synenberg worked for her father after school. She then attended Lynn University in Boca Raton, Fla., where she studied fashion marketing. After working summers with her father and doing an internship, she decided to further pursue jewelry design and completed an intensive six-month training program at the Gemological Institute of America in New York City. 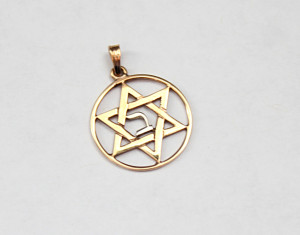 A Star of David pendant passed down to Synenberg that was originally a gift made by her grandfather, Saul Gottlieb, for her grandmother, Bernice.

After graduating from GIA, Synenberg searched for a job in the industry, however, found no one would hire her because of the Gottlieb name.

“Nobody wanted to hire me because they knew my family and thought I was going to steal their trade secrets and give them to my family,” she says.

After exhausting outside prospects, she took a position at the Gottlieb & Sons factory in New York City. Along the way, her now-husband Eric, whom she met while growing up in Cleveland, moved to New York with her. Unbeknownst to her, before Eric proposed, he reached out to her father and they concocted a plan where she would create her own engagement ring. Gottlieb asked Synenberg to design a ring for a “customer.”

“I said, ‘I can’t pick some guy’s ring, I’ve never done that before. I don’t know what his fiancée is going to like,’” Synenberg says, laughing.

After shipping away a creation she built and loved, she forgot about it.

“We were in Florida and it was New Year’s Eve and we were at the Fontainebleau and he proposed to me in the room. And he brings out the ring. I’m like, ‘Oh my god I made that ring, I designed that ring, oh my god I love that ring,” she says, smiling.

After stints working on high-end jewelry for her father’s company and later for David Yurman in Miami, Fla., Synenberg returned to Cleveland. She stopped working while she was pregnant with her second son. Raising her three children – Ari, 8, Noah, 6, and Asher, 2 – she continued occasionally making special pieces for friends and family and started to consider what her line might look like.

Then she went to Israel.

Swarovski crystal rivoli bracelets in an array of colors made by Synenberg. 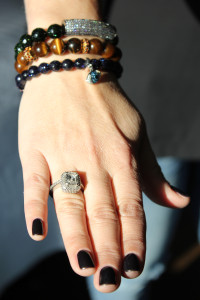 Synenberg displays the engagement ring she unknowingly designed before her husband, Eric, proposed to her.

The Jewish Women’s Renaissance Project seeks to inspire women who in turn will influence their communities. The group funds and plans several types of trips to Israel, most of which are for women. Ruchi Koval, co-founder and associate director of Jewish Family Experience, a Beachwood partner of the Jewish Women’s Renaissance Project, was on the group’s first trip in 2009.

“They don’t want people coming home from the trip and (saying) ‘now what?’ We want them to bring experiences back to the community,” Koval says.

Koval has been on five trips herself and was excited to hear another local woman was selected for the fashion trip. Although she wasn’t on Synenberg’s trip, she followed it on social media.

“It was so much fun, I was virtually experiencing it along with her,” Koval says. “I sort of immediately felt this kinship with her because she was going on this trip with all the people I knew.”

Synenberg, a member of Jewish Family Experience and B’nai Jeshurun Congregation in Pepper Pike, says the trip mixed fashion and cultural experiences in a special way. The group met an Israeli perfume designer at the Dead Sea, and they visited the Yvel jewelry company, which specializes in pearls and has a school, the Megemeria School of Jewelry and Art, where Ethiopian refugees are trained in jewelry design.

Altogether, however, the sisterhood bonding the women from all over the world on the trip left the strongest impact on Synenberg.

“Everybody from the group, we became like sisters. We let our guard down and told stories about our hardships, about everything,” she says. “I realized that in the fashion industry, usually people don’t want to help people, they don’t want to share their secrets. It’s very protective. And this trip, it was the first time I had seen in my entire life people wanting to help other people succeed.”

By the time Synenberg was on her way home, she knew what she needed to do.

“I was like, ‘I’m going to go back and I’m going to start my own jewelry line,’” she says.

Moreover, the bright colors inherent in Israeli jewelry took Synenberg back to her childhood interest in semi-precious stones.

“I felt very lively there and they weren’t afraid to use color in their jewelry. So in my jewelry, I decided I was going to use lots of colors and I wasn’t going to just do diamonds,” she says. 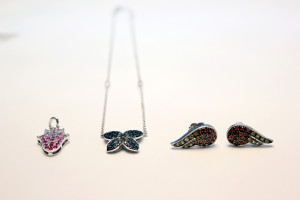 Upon returning, Synenberg told her father that she was starting her own line and asked for his support, which he gave unequivocally. She decided to begin on two lines. The first line is high-end, like her previous work. The second line, made using Swarovski crystals, is more affordable and is inspired by the sense of sisterhood imparted via the Israel trip. Synenberg wanted every woman she cares about to be able to afford a design.

“One of the things she wanted to do was to make her jewelry line affordable,” Koval says. “She did come home inspired to connect to that professional space.”

One of the first designs she created was a cuff, designed with the Western Wall’s uneven stones as inspiration. She says she wore the cuff out recently and joked that someone tried to buy it off of her, but she is still refining the piece before selling it.

“It’s one of those things I want to perfect,” she says.

Synenberg still keeps in touch with her friends from the trip daily through a WhatsApp group. She is taking her business process slow, working with a manufacturer to perfect each design along the way. She recently began selling the Swarovski crystal line at Pennello Gallery in Cleveland’s Little Italy neighborhood and online. The higher-end pieces are in the manufacturing process, and Synenberg says she hopes to have the website launched this coming summer.

She says she is also more motivated to give back and connect to the local Jewish community since returning from Israel, volunteering with the Jewish Federation of Cleveland and Jewish Family Experience.

“I feel like it made me a better person,” she says. “It made me really want to be more involved with the community here and help people in anyway possible.” js