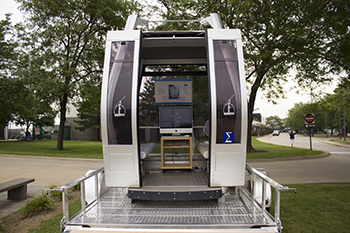 In the near future East Siders may have another reason to venture north of 480, young professionals living downtown can forget walking all together and the West Siders will be crossing the bridge for one reason…

CLEVELAND IS GETTING A SKYLIFT…?

Yes, it’s not a go yet, but it is in the works. LeanDog, a Cleveland software company, founded the project in with help from 29 Cleveland civic supporters, business advocates, consultants and contributors.

With the SkyLift project we want everyone in Cleveland to collaborate and work together to make this happen- ClevelandSkyLift.com.”

Cleveland SkyLift even has a demo car to help get Clevelander’s hype and hip to the idea of having an aerial cable car system all over the city. Anyone can support SkyLift (and make Cleveland freaking awesome) by placing a donation on their webpage.