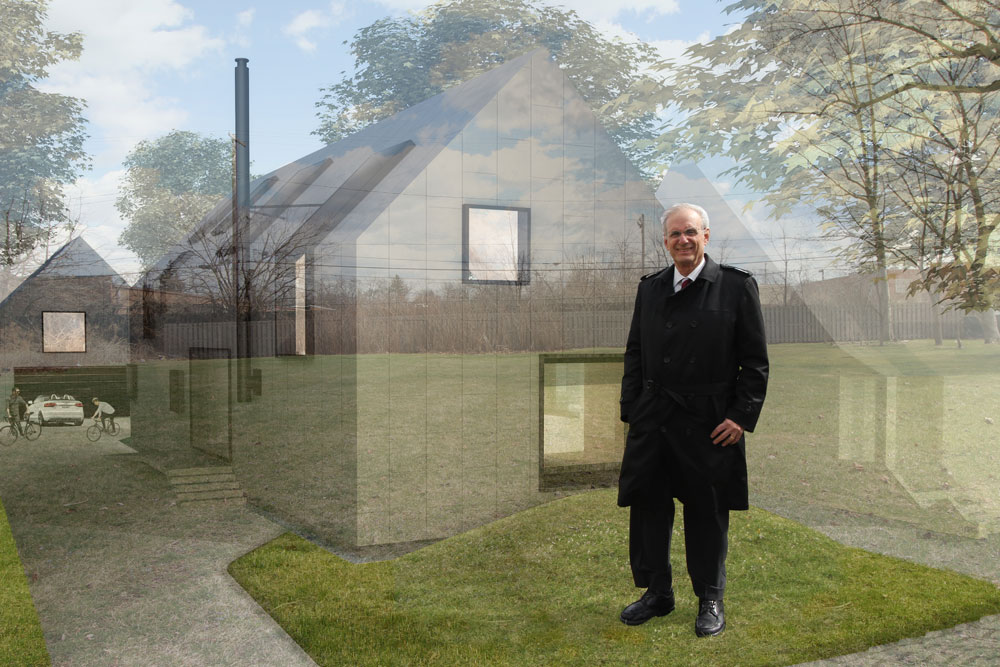 Shaker Heights Mayor Earl M. Leiken stands in front of a vacant lot in the southern Moreland neighborhood. Superimposed on the lot is a rendering from Donnelly Eber Architects in New York City, one of the winning firms in the Shaker Design Competition aimed at re-imagining the neighborhood.

Just west of Lee Road, near where Kinsman Road becomes Chagrin Boulevard, is the southern Moreland neighborhood, the most blighted part of Shaker Heights. Its residences, duplexes alternating with single-family homes, sit well back from the street, and the grid is regular and Cleveland-style, like the architecture. There are generous front yards and deep tree lawns. The area feels spacious, even rangy. It also feels different.

The 50 vacant lots sprinkled throughout the neighborhood, some quite large, attest to the hardship southern Moreland went through in the past several decades, particularly during the recession of nearly 10 years ago. Some might view these tears in the neighborhood fabric with despair. Others see them as opportunity.

Could this part of southwest Shaker Heights be a stalking horse for innovative development on the East Side? Could fresh takes on residential living help southern Moreland integrate into a “streetcar suburb” known for its variety of more European architectural styles? 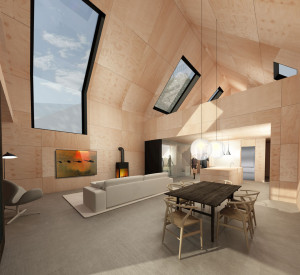 Open spaces, high ceilings and skylights are among the features in this Donnelly Eber rendering of what the inside of a new home in the southern Moreland neighborhood might look like.

Southern Moreland is bordered by Scottsdale Boulevard to the south and Lee Road to the east. It originally was part of East View Village, a municipality at the south and southeast borders of Shaker Heights. East View existed from 1906 to 1920, when it was absorbed by Shaker Village.

Most of the homes were built in the 1920s through the 1940s. According to the Cuyahoga County Fiscal Officer, the median market value of a southern Moreland home is approximately $85,000.

Proposed new homes aim to attract artists and young professionals eager to experience the authenticity of an established neighborhood along with proximity to the Van Aken District project taking shape at Van Aken Boulevard and Warrensville Center Road.

Shaker Heights Mayor Earl M. Leiken says, “Anything that strengthens Shaker Heights also strengthens the potential for success of the Van Aken development. Thus, an infusion of new residents into the Moreland area, artists and otherwise, would simply add to the market that exists for Van Aken’s businesses, restaurants and retailers.“

The first targets of the design competition are three lots – a single, a double and a triple – on Chelton Road, which runs north and south between Kinsman and Scottsdale.

While the city of Shaker Heights has arranged for 10-year tax abatements on new construction in southern Moreland, developers are expected to finance that construction, Leiken says. On a recent drive through, he pointed out that 50 and 60 years ago, southern Moreland was part of the greater Kinsman neighborhood, one of Greater Cleveland’s key Jewish areas (the other was Glenville). By the 1960s, southern Moreland was largely African-American, and by the 21st century, because of the lack of economic growth in Cleveland, “problems really hit the neighborhood hard with the foreclosure crisis.”

There are remnants of southern Moreland’s Jewish past: The Chapel of Hope Christian Fellowship on Lee Road, a block east of Chelton, was the Shaker-Lee Synagogue, and the Buckeye State Credit Union on Chagrin Boulevard is the former Temple Beth El.

Following the recession, the area has benefited from federal money, “a lot of county money, especially for demolitions, and starting in 2009, city money,” the mayor says. All of that led to Moreland Rising, the neighborhood revitalization program designed to more seamlessly fold an area that 100 years ago was East View Village into Shaker Heights. Moreland Rising, which began in 2015, is a city-neighborhood collaboration that aims to strengthen the identity of southern Moreland through neighborhood nights and other social and cultural events.

About a 12-minute walk from the Greater Cleveland RTA’s Blue Line Rapid, southern Moreland sits on the eastern edge of today’s Kinsman neighborhood and is a convenient ride to downtown Cleveland and to the rapidly developing Van Aken District under construction to the east. Synergy is envisioned.

“The city does not see any conflict between the Van Aken project and Moreland redevelopment,” Leiken says. “In fact, we see the two as being mutually supportive. The Van Aken project is designed to create a place for residents to dine, shop and spend time and also as a location to attract some significant business development to the Shaker community.”

Public transit is key to both the Van Aken and south Moreland projects, Leiken notes. “All of this fits with the information we have on desirable lifestyles for younger people, including millennials but also for baby boomers as well, which places increased emphasis on walkability and public transit as an alternative to reliance on the automobile.”

Now the plans are in and the vacant lots are ready to be filled with new, forward-looking residences. All that’s required is refining the plans and coming up with the money to build the homes. As Kamla Lewis, director of the city’s neighborhood revitalization program, says, “our next step is to really do some deep thinking internally about the implications of the various ideas presented.” Another step will be to discuss the project with the design competition winners, she adds.

Lewis was impressed with the submissions. What struck her the most?

“I would say the designs themselves,” she says. “They really did a good job of reimagining how to reconfigure these traditional lots in a city with a very traditional neighborhood.” 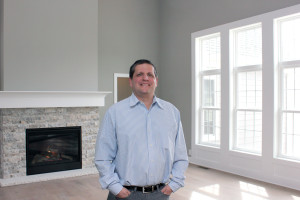 Rodney Simon, owner of Simcon Homes, which would build homes designed by Donnelly Eber Architects should the Shaker Design Competitions projects get funded, stands in a model home in the Sterling Lakes development of Pepper Pike.

Rodney Simon, who owns Simcon Homes, looks forward to discussions with the city. He would build the homes Donnelly Eber Architects designed. They would be a dramatic departure from what’s in the southern Moreland neighborhood now.

Simon is eager to be in on the start of what he says could be the next buzz area, but he knows such development takes time and is organic. He says that if southern Moreland residential renovation takes off, it would be the first such effort in an East Side suburb.

“There are different parts of Cleveland that have grown organically through the years: Ohio City, Tremont, Detroit-Shoreway, Hingetown now,” he says, standing in the kitchen of a $620,000 Simcon Home he’s built in Sterling Lakes in Pepper Pike. “It took time. This is something that came out of years and years of younger people realizing there’s a nice area there, they’re really close to bars and restaurants, very cheap housing. Now, of course, those areas are overdeveloped and very, very expensive. So, I think Shaker’s trying to get on board.”

Southern Moreland has “really good access to hospitals in that part of Shaker and great access to downtown,” he says, calling this revitalization effort “just another extension of what Shaker’s trying to do.” 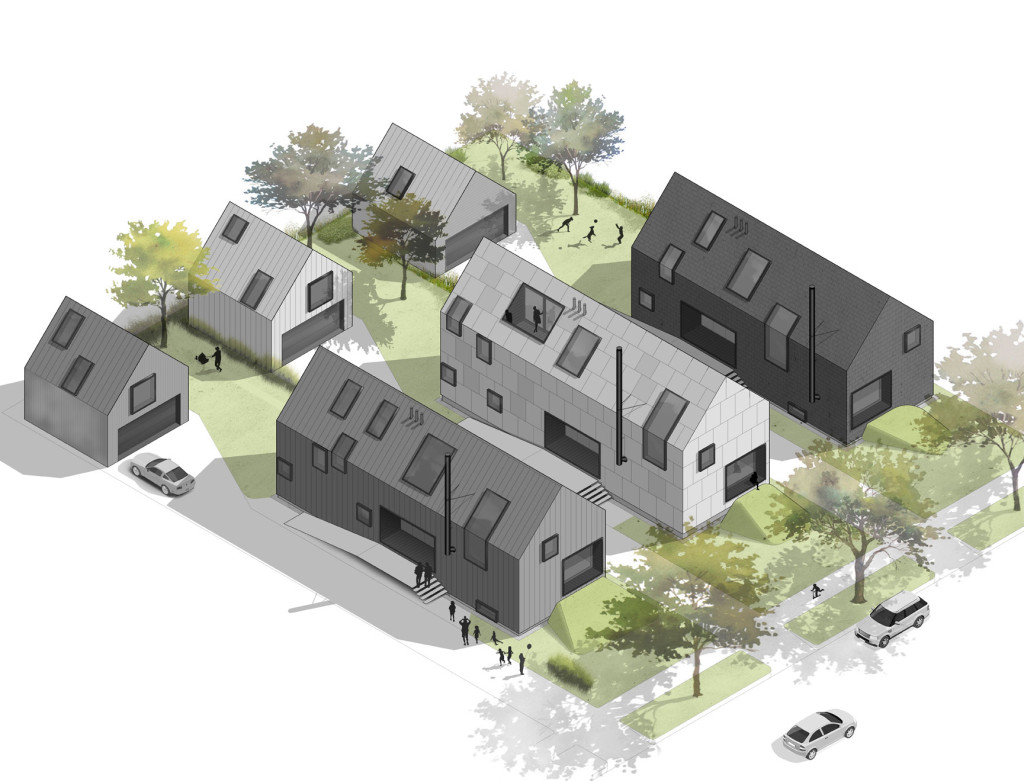 What Shaker Heights’ southern Moreland neighborhood might look like should winning
designs in the Shaker Design Competition, like this one from Donnelly Eber, come to fruition.

Instead of drywall in the interior, there’s finished plywood, and the houses are clad in a neutral, cement-like product. Other unique characteristics are vaulted ceilings and open lofts. While the Donnelly Eber concepts aim to fit into current southern Moreland, they also would stand out visually and in cost, Simon suggests.

Because the architectural drawings are in the conceptual stage, there are no final figures on size and cost, he says. If he and the architects determine building such a home with the most advanced materials would cost $350,000, but “we can only sell product there for $300,000, we would have to redesign,” he says.

“You can’t start putting up houses that people won’t want to pay for in that area or won’t be able to afford,” Simon says, noting the injection of new housing at prices far higher than in the rest of the neighborhood could generate friction. At the same time, such homes could bring a new sense of pride to the area, spurring current residents to upgrade and improve their own – and lifting property values.

To get to downtown from southern Moreland, one has to travel “not the most inviting streets,” Simon says, though there’s also the Rapid. Yet people crave authenticity, not the franchises so characteristic of lifestyle destinations. People want “local beers, they want a drink that’s made nice, and on the East Side, there isn’t what you’re finding on the West Side,” he says, noting Shaker wants “to get on it” and the burgeoning Van Aken District is key.

In any case, Simon suggests the homes he wants to build with Donnelly Eber would be something new, not only to Shaker Heights but also to Northeast Ohio. Any developer could build a “standard box that fits on those lots, but I don’t think you’re going to get the right buyer, I don’t think you’re going to get that young couple that wants a little bit of urban living but also with suburban, you know, Shaker schools if they have kids – they’re going to want something different and exciting.” js