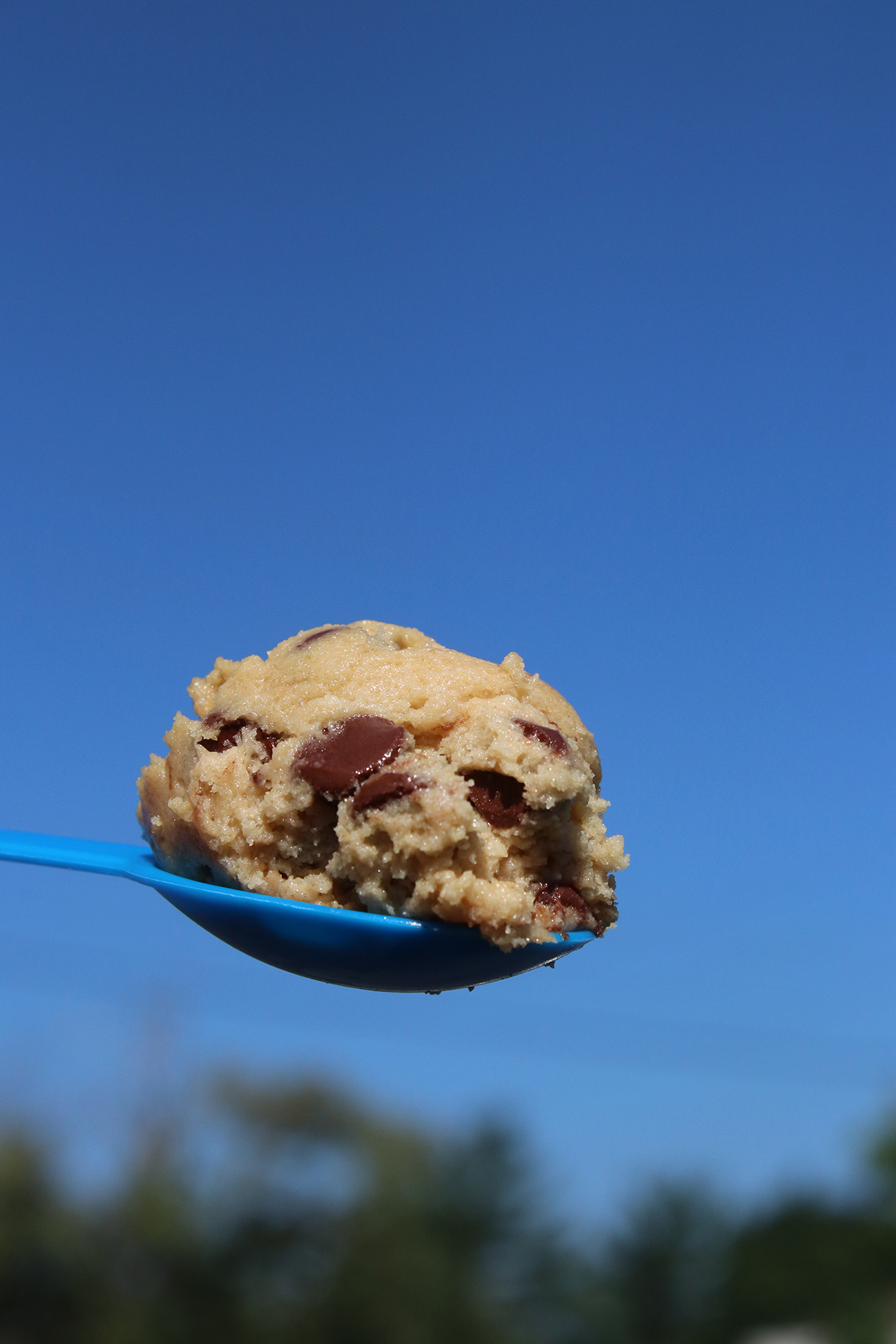 Feel free to eat the cookie dough.That statement defies conventional wisdom handed down by bubbes and bakers for years – that eating raw cookie dough can make one sick despite its deliciousness – but it’s the central tenet of a delectable new venture by Katie Pollock and Andy Simms called Dough Street.

Traditional cookie dough contains both raw eggs and raw flour, which, yes, can make people sick. But Dough Street uses pasteurized egg whites and heat-treated flour, which Pollock says makes their dough safe to eat. You can even bake Dough Street’s doughs because they aren’t egg-free.

Unlike a traditional bakery, Dough Street isn’t bricks and mortar. Rather, the couple’s confectionery concept involves a mobile dessert cart that will appear at weddings, life-cycle celebrations, family reunions, corporate events and other occasions.

In fact, there’s one very special event already on the calendar.

“(Dough Street) will now be (at) our daughter’s bat mitzvah,” Pollock says, laughing. 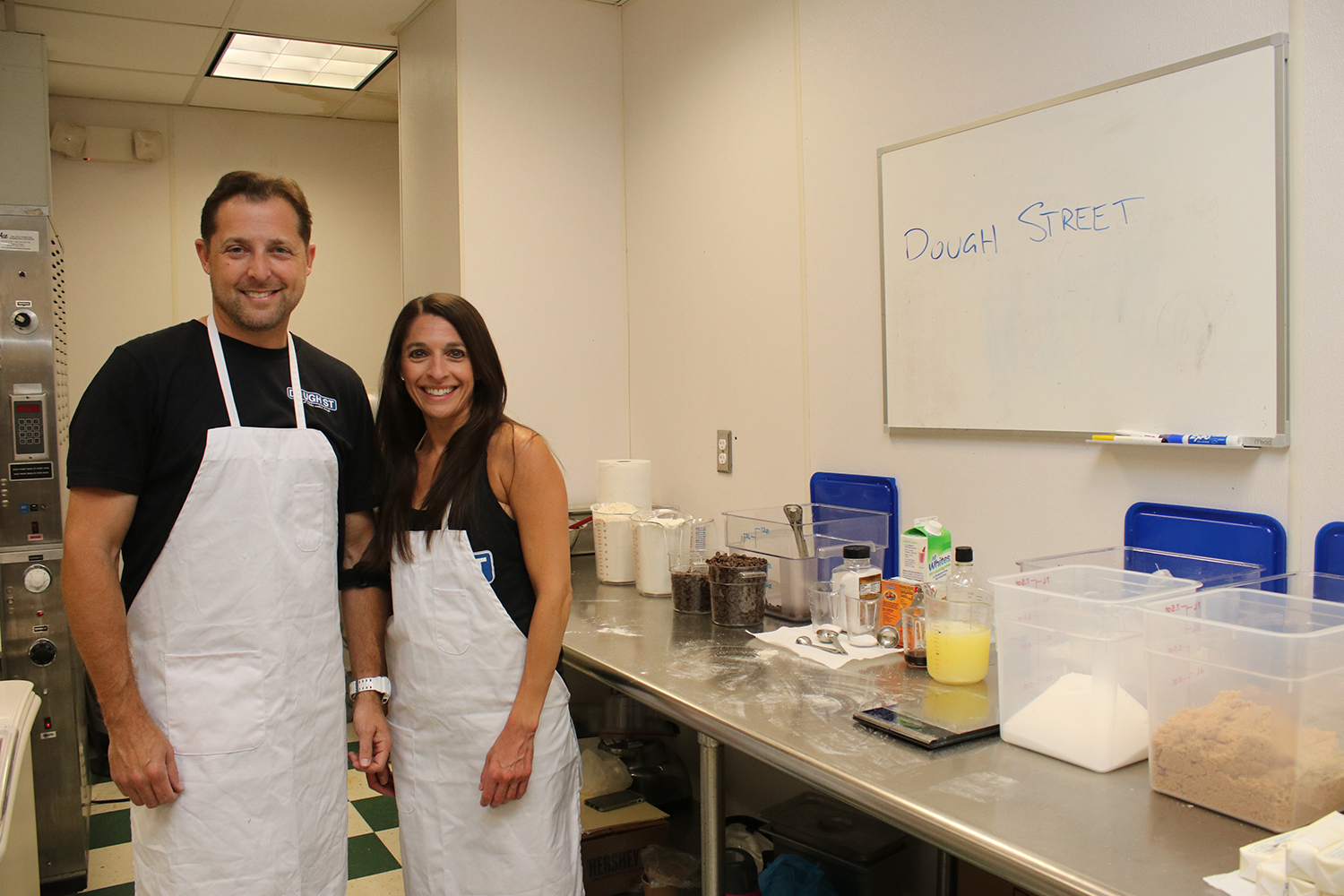 Both Pollock and Simms – Solon residents, parents of 12- and 10-year-old daughters, and congregants at Anshe Chesed Fairmount Temple in Beachwood – have full-time jobs outside of Dough Street.

He’s an agent for Dallas-based Young Money APAA Sports, where he oversees football operations. None of his NFL clients had tasted Dough Street’s dough as of early September since they all were in training camp through August, but he said word has spread and many were excited to try it.

So, how did they decide to get into the dessert business?

It all started due to Pollock’s love of cookies and baking, but what planted the seed for making a business out of it was a summer 2017 visit to then-newly opened DŌ, Cookie Dough Confections in New York City. Pollock waited in line for 45 minutes to taste it.

“It was just so delicious,” she says. “We had it again that weekend while we were there, we ordered it online. Every trip we went (on), I wondered, ‘Well maybe they have cookie dough!’ We kept thinking, ‘How can we do this and how can we bring it to Cleveland?’”

It was a July 2018 trip to California, during which they found and ate more cookie dough, that got them thinking seriously about launching what’s now Dough Street. They weren’t aware of any places in Northeast Ohio that exclusively or even primarily sell edible cookie dough, so they decided to act.

Someone has to do it. (In all seriousness, he says “it’s the best part of the job.”)

Simms says he knows a good cookie dough when he tastes it, echoing former Supreme Court Justice Potter Stewart’s threshold for obscenity. Beyond that, the dough’s consistency is important to him.

Pollock wants a “nice flavor” in her cookie dough, she says, adding she uses full-sized chocolate chips because she doesn’t feel mini chocolate chips have the “full flavor.” 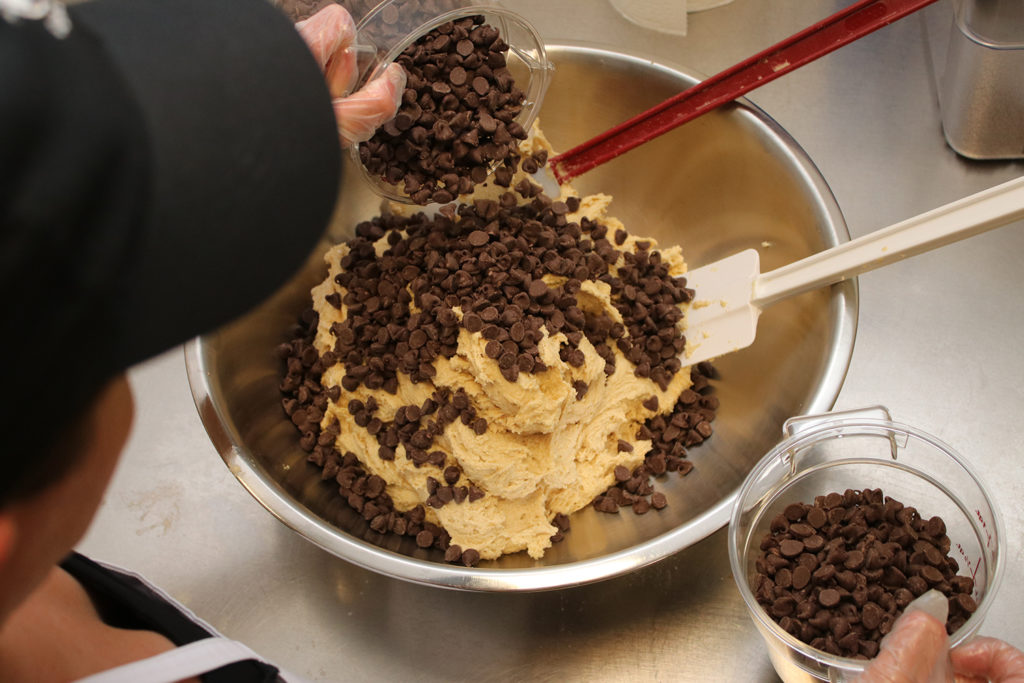 Pollock prefers to use full-size chocolate chips so that Dough Street’s cookie dough has “full flavor.”

The couple is open to experimenting with new flavors but doesn’t plan on expanding the menu anytime soon.

“Right now, we really want to do what we do and do it right,” Pollock says. “In the very short time we’ve been in business, I’ve gotten a lot of flavor suggestions from people. Maybe when we get more experience and we roll (the company) out more, we’ll do like a flavor of the month that we would add to the menu.”

Dough Street flavors are served like ice cream is served, scooped, which gives customers the option of eating cookie dough from a bowl or waffle cone. Pollock says bowls have been more popular thus far, but Simms says the couple doesn’t have a large enough sample size yet to draw conclusions.

“If a few people have a cone, others will see that it looks good,” Simms says. “In general, I think the cups will sell more, but there’s a place for (the cones).”

A single 4 oz. scoop is $4, a double scoop $7, and if the customer wants it in the waffle cone, it’s an extra dollar no matter how many scoops. Right now, the waffle cones are supplied by an outside vendor, but making their own cones is something they’re considering for the future.

After customers decide on their dough flavor and preferred vessel, they can decide which toppings to add. Current options include M&Ms, chocolate chips and sprinkles, but like the dough flavors, topping selections could expand.

“The cookie dough is the prize itself right now,” Simms says.

“It’s the star of the show,” Pollock adds.

Dough Street isn’t kosher-certified since it’s made in a shared kitchen, but all of the individual ingredients in every flavor of its dough are kosher.

The cookie dough isn’t prepared in the couple’s home kitchen but rather at the Cleveland Culinary Launch and Kitchen in downtown Cleveland.

Pollock researched obtaining a license for having the company’s kitchen in their house, but they needed a bigger mixer to make large batches of dough. She learned about the culinary kitchen from friends who had used it.

“I called (the culinary kitchen) and said I need information. The owner said, ‘Do you want to come to an informational meeting?’ and I said, ‘No, I want to start tomorrow!” says Pollock, laughing.

The couple works in the kitchen together, but Simms jokes his wife “won’t let me touch the mixer.” 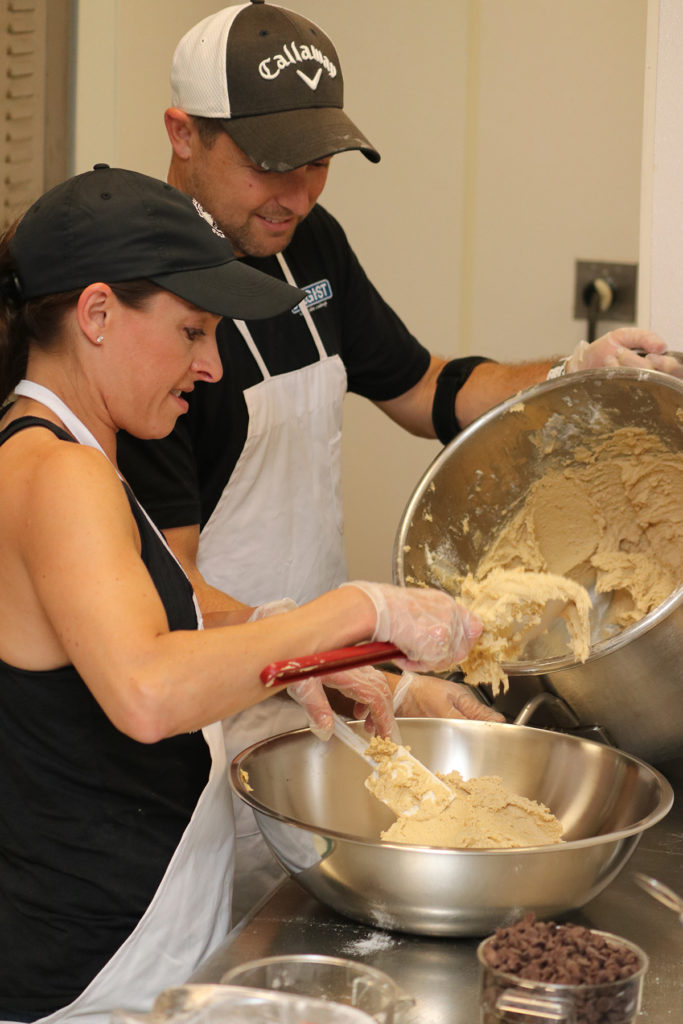 Pollock and Simms work together on a batch of chocolate chip cookie dough.

Dough Street had its first “test run” Aug. 18 at Solon Pop-Up in the Park, where Pollock and Simms planned on selling for the event’s full five hours but sold out of their dough in just three hours.

They plan to do more local events, like the Cleveland Flea, but would also like to eventually be on shelves at local grocers. They plan to begin online sales in the next few months.

“We’ll see where it takes us and where it goes, but right now, we’ve got a fun product and people want to try it,” Simms says.

“We just really wanted to bring this to the community. Nobody in Cleveland was doing just cookie dough, so we felt like there was an opening for it and people were going to enjoy it,” Pollock says.

Despite time constraints put on them by their other full-time endeavors – including as parents – they’re committed to making Dough Street a success.

“Our attitude is, we know it’s going to take time to get this business up (and running),” Simms says. “We’ve got a great product. Not only do we believe in it, but it seems like other people do, too. So, we create the time right now, no matter how hard it is, to be successful.” js

Dough Street is scheduled to be available during at least three upcoming public events: